[Author’s note: I initially wrote this post in January 2015, but I lost a lot of images when I switched hosts, and I felt like it was time for an update anyway. So here it is: the July 2016 version!]

I’m kind of obsessed with this woman’s dresses. Her ability to drape and flatter the body are legendary, and once I discovered her work, I wanted to know more about her. I also wanted to wear her dresses as often as possible. This one might be my favorite: 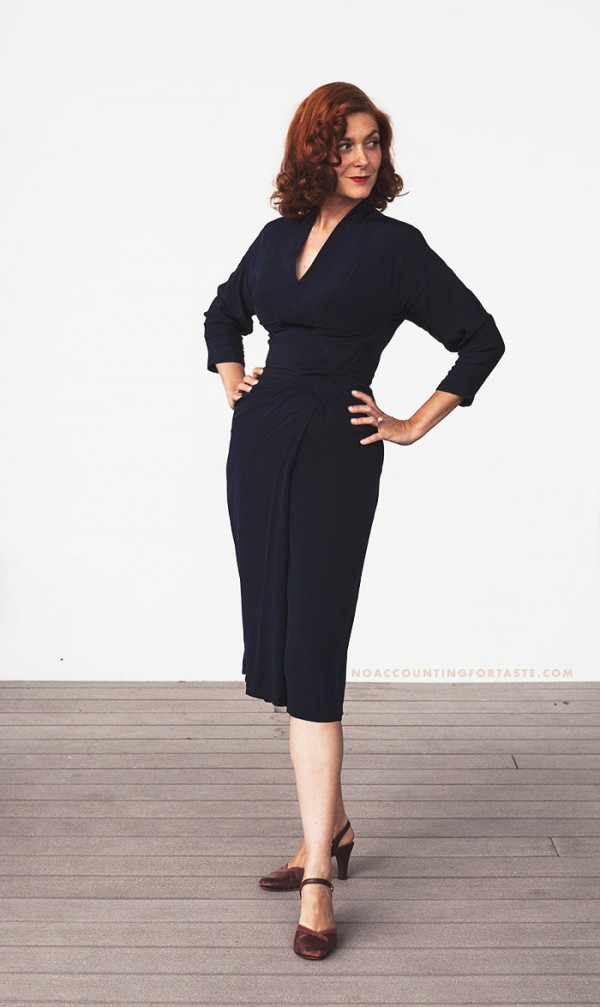 A 1950s Dorothy O’Hara navy blue draped dress scored on ebay, taken before I knew how to properly brush out a pin curl set.

But her draping style kind of evolved from some more broad-shouldered, narrow-hipped designs of the 1940s. A few examples: 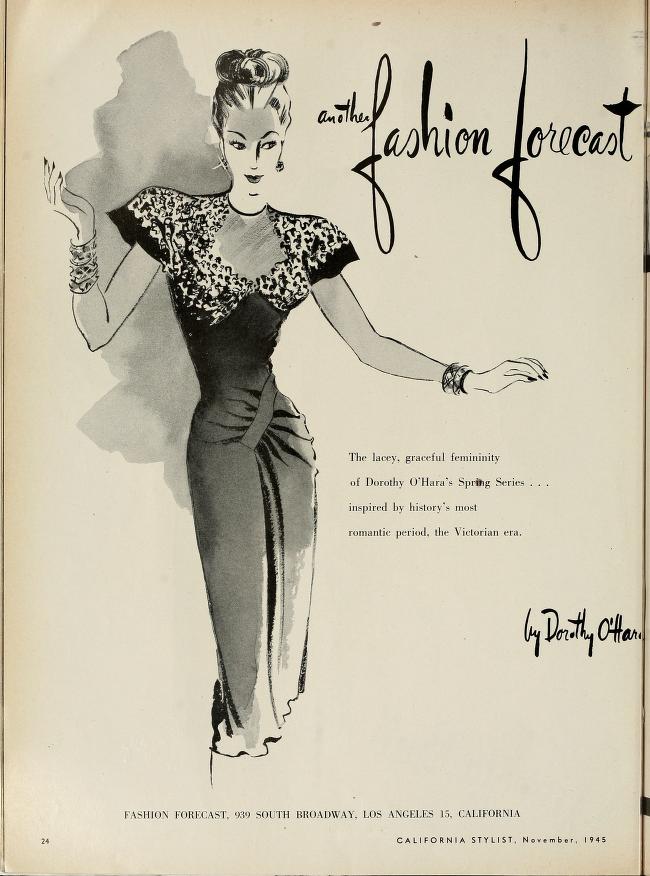 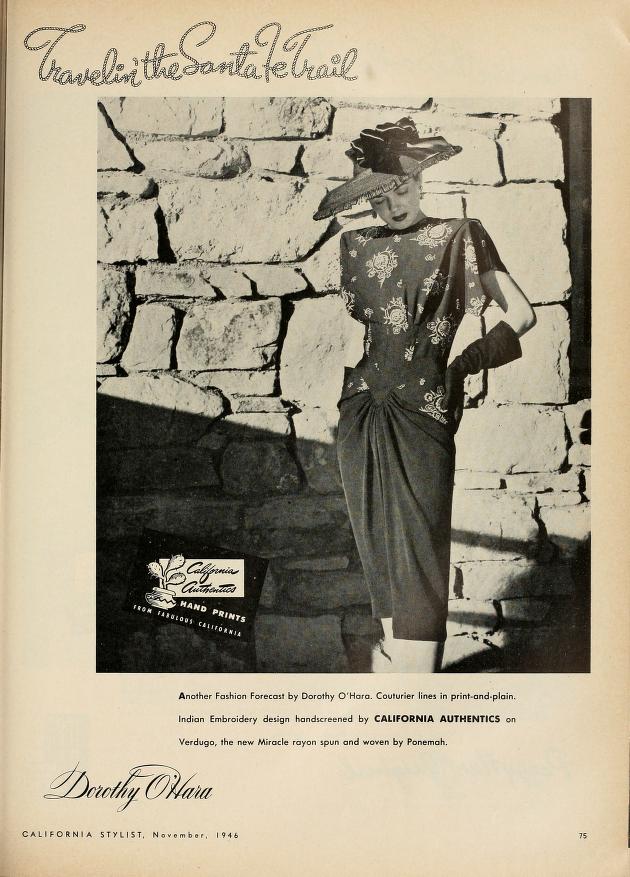 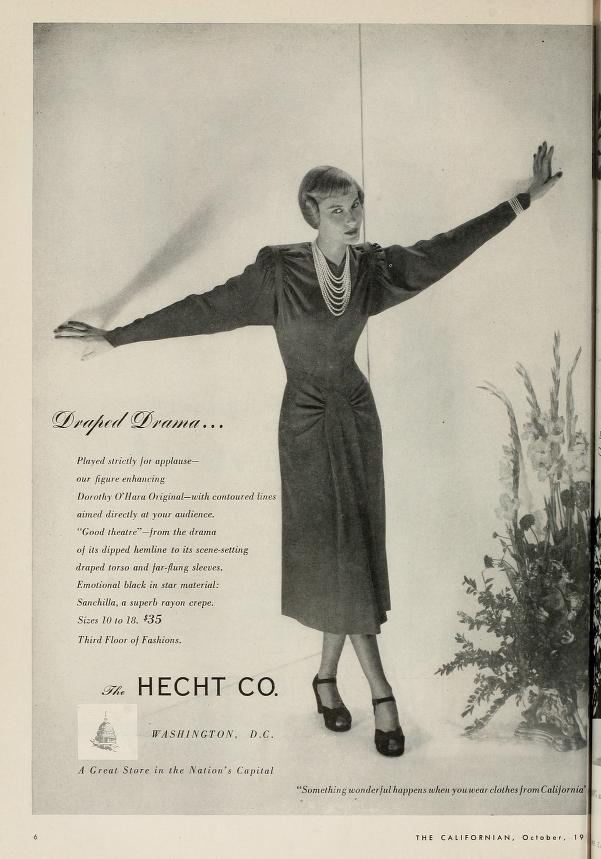 One of the things I love about her designs is that they’re all step-in, even her dresses that looked like suits or two-piece outfits.

So that’s a bit about her designs, but I found her story to be just as enthralling. Dorothy and her brother Kenneth were born in Los Angeles in 1911 and 1913, respectively. Their mother, Blanche, was a dressmaker from Ohio and married James O’Hara around 1907. It appears that he was something of an unsavory character, at least in his younger years. He worked in the mining industry, probably dealing with oil. He had two children with his first wife Rose in Colorado, then moved to Los Angeles and married Blanche, but had moved on to Texas and remarried by 1917. (Lest we get judgy, he married a woman who already had seven children, and he remained with them until his death in 1939.)

At any rate, Blanche was left in Los Angeles with two very young children, and continued to work as a dressmaker. It appears that they moved around a great deal, because each year in the city directory they have a different address. Incidentally, Blanche listed herself as a widow in the city directories after James left, although he didn’t actually die until 1939. Given the stigma of divorce or separation at the time, one can’t exactly blame her, and it’s likely that she didn’t know he was alive.

Dorothy learned from her mother, who worked as a dressmaker most of her life. In 1934, Dorothy married Henry (Hank) J. Lunney, though she continued to use her maiden name professionally. Their son Falcon was born in 1935. During the 1930s and early 1940s, Dorothy worked for some small dress manufacturers in Los Angeles, including the Malouf Dress Corporation and Hunt Broughton & Hunt, Peggy Hunt’s dressmaking firm.

Broadway in the 1930s was an exciting place to be. Next door is the United Artists theater, which is now the Ace Hotel.

By 1945, her career had started to really take off. Dorothy and Hank established Fashion Forecast (later Dorothy O’Hara Inc.), their own manufacturing firm, 1944. 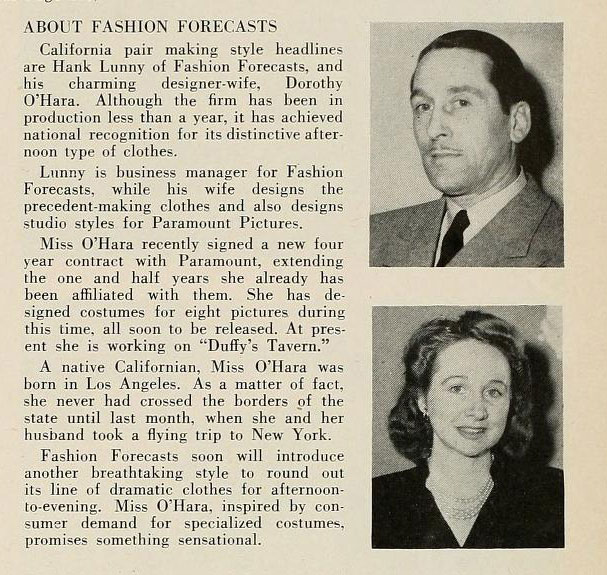 She was working for Paramount as a costume designer when she showed her first collection outside California at the St. Regis Hotel in New York for Arnold Constable, at that point a long-established high-end department store. From a 1945 New York Sun article by Mabel Greene:

At the same time, California clothing designers and manufacturers were continuing to organize and heavily market California fashion as unique and desirable. In the trade publication California Stylist, the local industry was proud to claim her as a native daughter, despite her first showing happening away from the West Coast.

“Lovely young Dorothy O’Hara, talented double-time fashion designer for both Paramount Studios and her own manufacturing firm, Fashion Forecast, was recently ‘discovered’ by the press of Chicago and New York when her fall collection of dresses was introduced in those two cities… The Fashion Forecast line is designed with the same deft touches, the same eye to appeal and flattery, which mark the film styles by Miss O’Hara, yet she never repeats or copies from one medium to the other.” 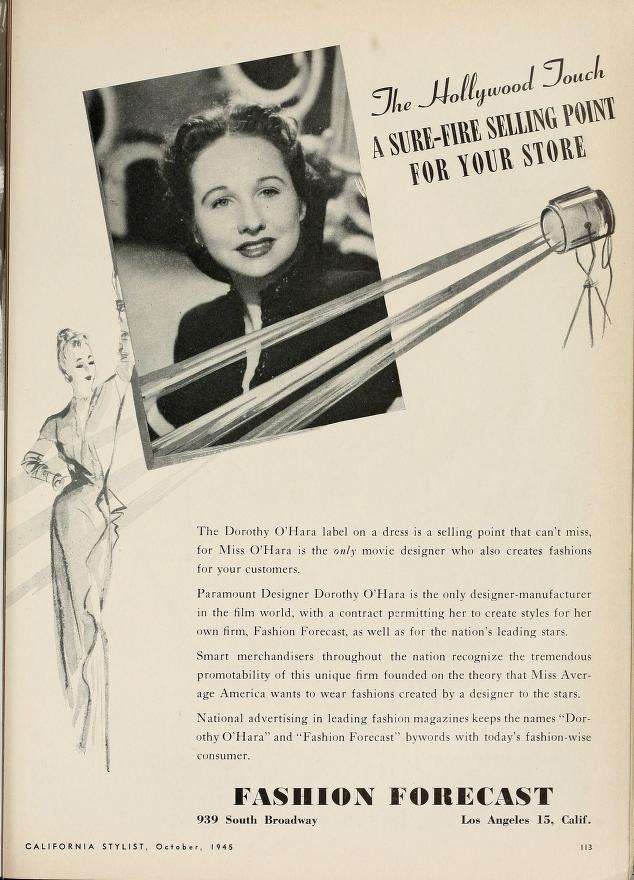 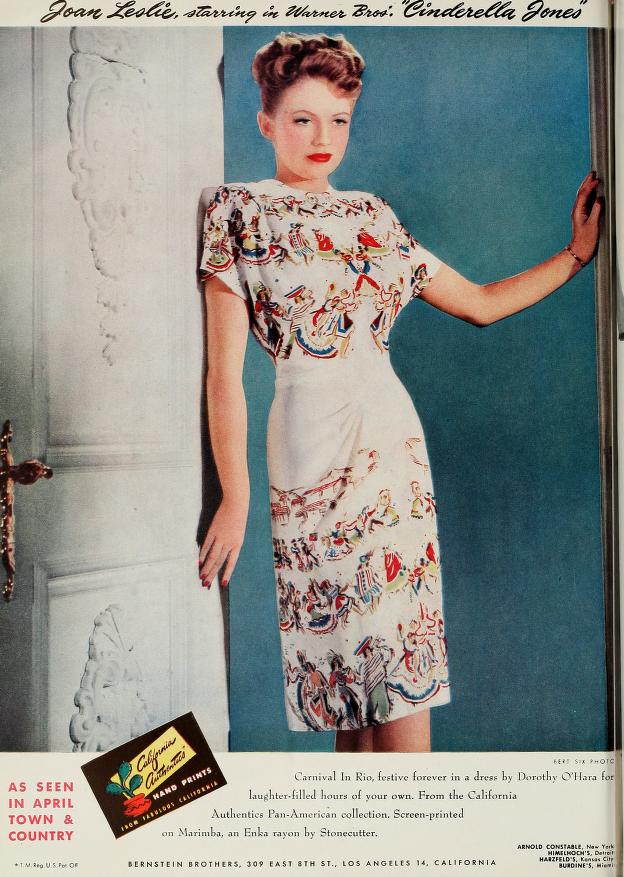 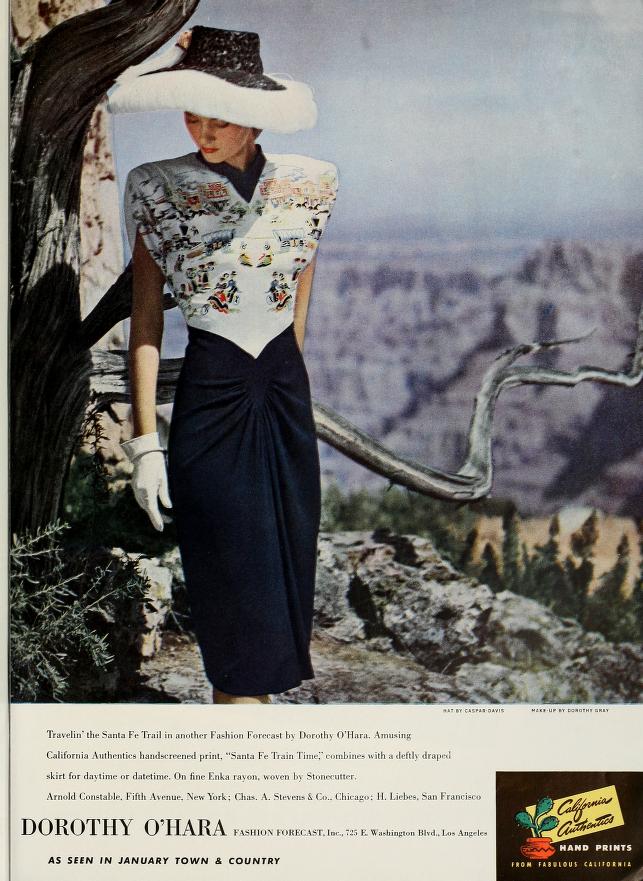 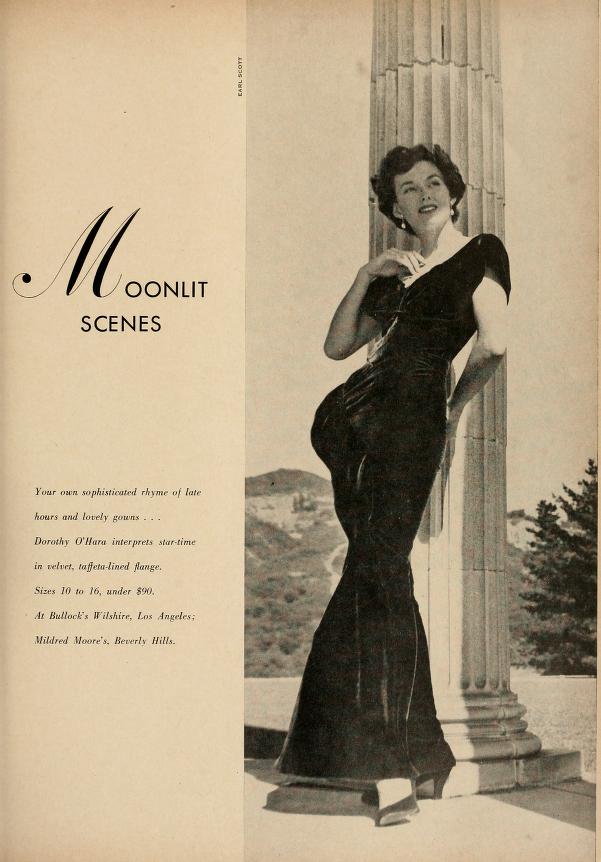 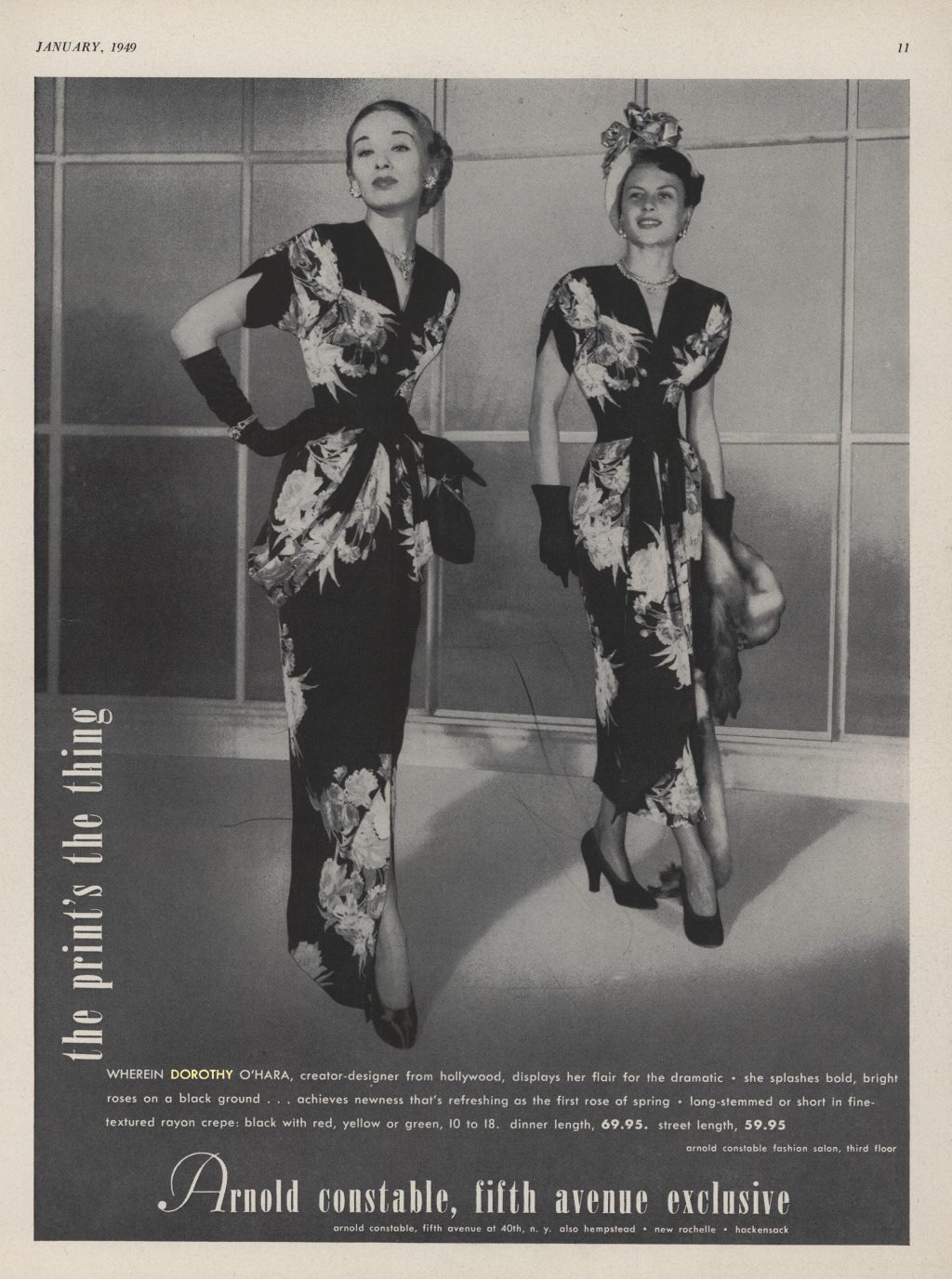 The Californian, Winter 1950 (modeled by Ms. O’Hara herself; no wonder her dresses had such slim hips. Keep in mind she’s about 40 years old here. I sat that not because 40 is too old to be modeling—it’s not, I’m almost 40—but because damn, she is tiny and looks not 40) 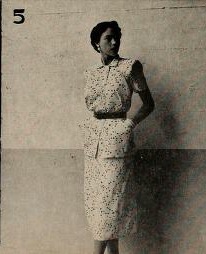 A relatively rare casual afternoon frock seen in The Californian, 1951

With the exception of a bit of a break in the early 1950s, she was prominently featured in both advertisement and editorial in Vogue and Harper’s Bazaar throughout her career. In the mid-1950s, her look shifted from elegantly draped to elegantly draped with a very strong dose of sexy, but she remained versatile. In 1953, she designed her first complete evening wear collection. She also designed the dresses in which the daughters of the Governor of California would meet Queen Elizabeth. But her later 1950s dresses is what she’s primarily known for. 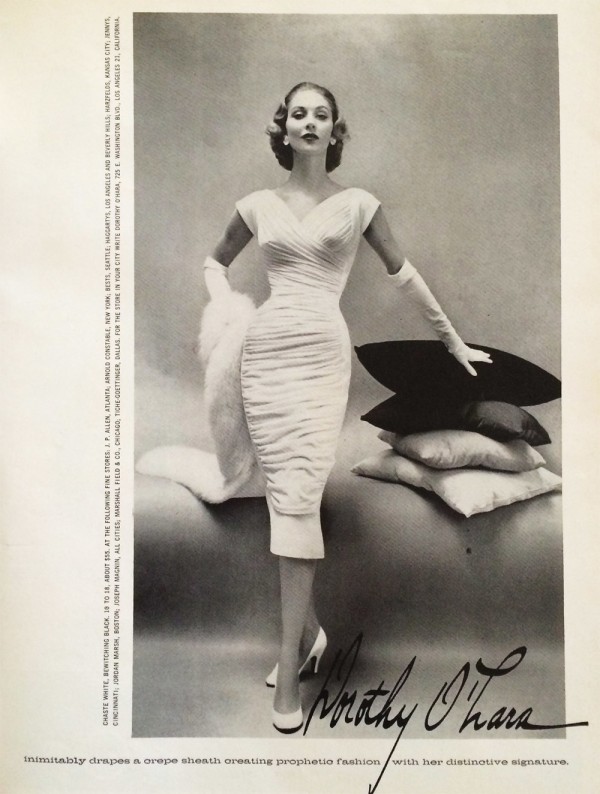 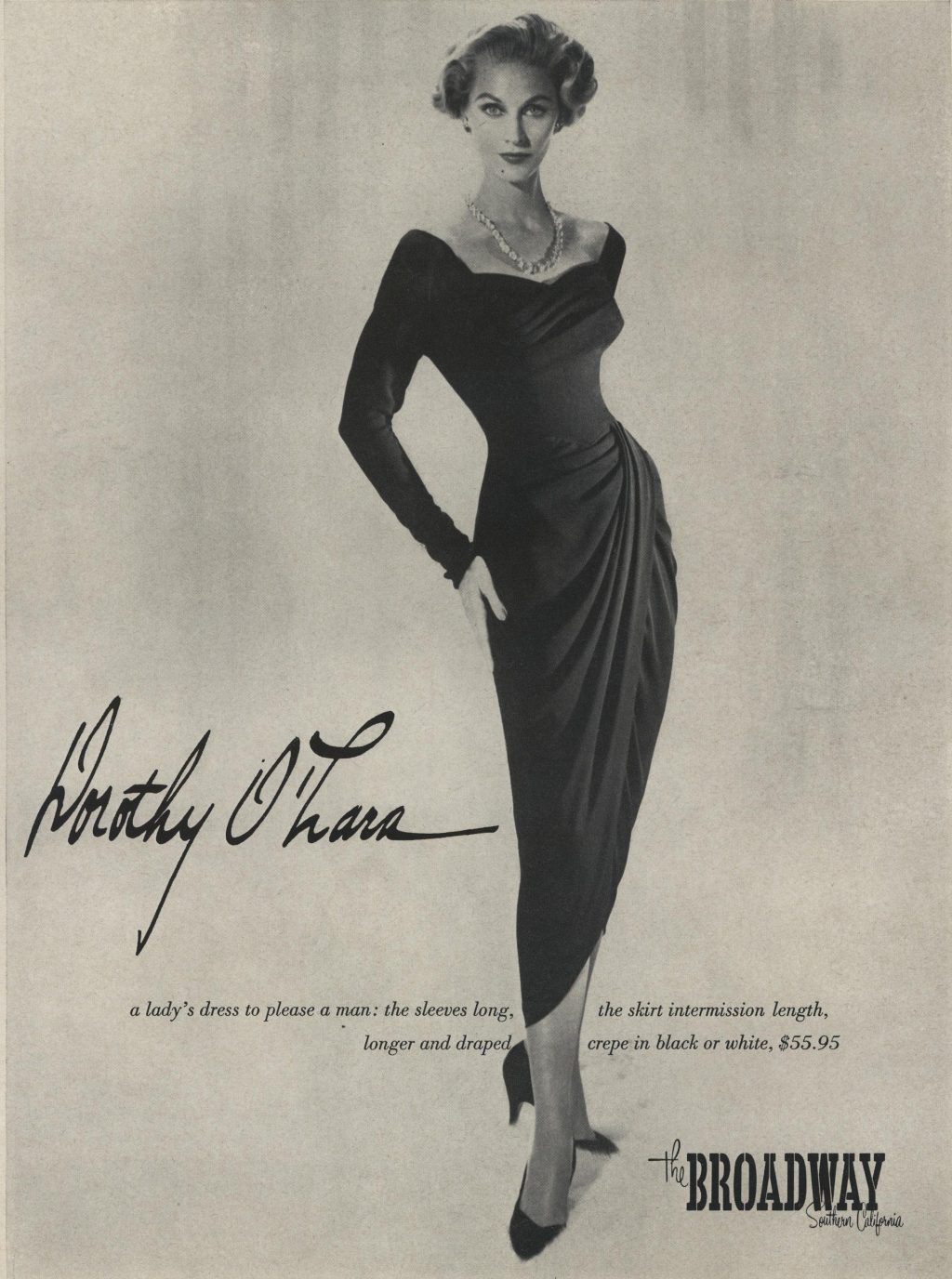 Dorothy and her husband and son moved from Beverly Hills (the house or apartment building they lived in at 8717 Burton Way has since been replaced) to Newport Beach. Specifically, they built a home on Lido Isle, a small man-made island in the Newport Beach harbor, built from an existing mudflat and developed for residential use in the early 1920s to resemble a European resort. Their single-story home was designed by Hank and architect Theodore Pletach in true California style, built around a central lanai for year-round outdoor living. A 1954 LA Times article shows pictures of the interior, but the online copies are so poor that it’s impossible to make out any detail. Dorothy died in 1963 at the young age of 51. 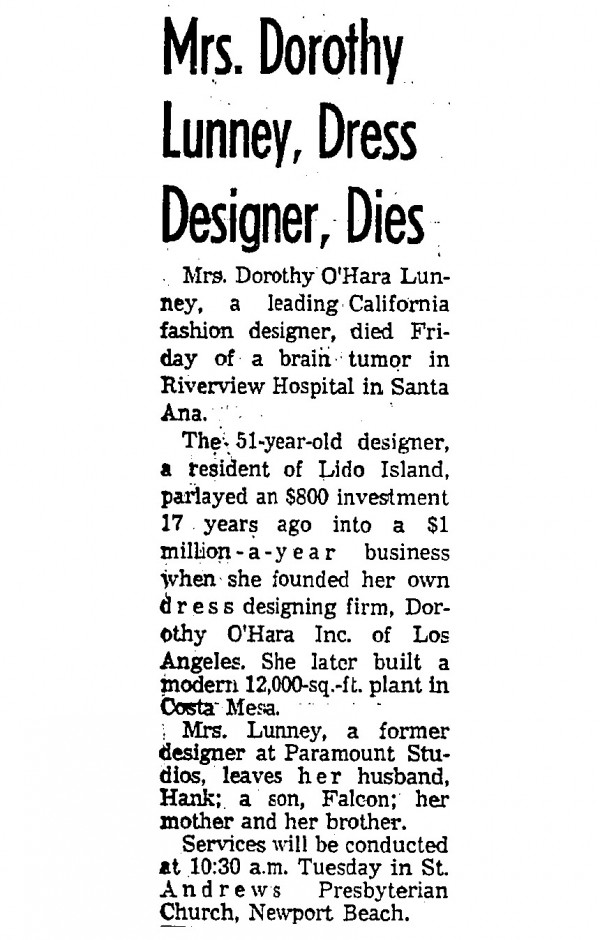 Again, from the 1945 article, which sums it up pretty well: