“Quiet Louella Ballerino has created a perfect furor down here. Everybody corners you to ask, ‘Have you seen Ballerino’s things?’ — so of course, everybody has… Ballerino is what the hungry fashion world is roaming about in search of–a highly individual designer who does not notice the passing of Paris. She never has taken her cue from there, not Ballerino. Biggest shops in New York all use her things and publications grab for photographs because they are so exciting.”

I love the work of all of the Affiliated Fashionists, but Louella Ballerino is something special. A true pioneer of California sportswear, she combined global influences with California style to create all manner of wearable fashion in innovative ways, and I’m surprised she isn’t better known. Let’s change that, shall we?

She was born Louella Smith in Bear Creek, Iowa (a little over an hour away from my family) in 1900, and shortly after the birth of her sister in 1905 the family moved to Los Angeles. She started at USC in in 1918, and during her four years there she worked as a fashion illustrator and married her first husband Dudley Jenkins and had two children. After that she studied sculpture and worked under MGM designer Andre-Ani. In 1927 she started creating original sketches for other manufacturers, and designed for “an exclusive custom shop” for a couple years. In 1930 she and her first husband split up, she kept the house and the kids and was working full time as a designer, studying pattern drafting at night at Frank Wiggins Trade School so she could eventually make her own clothing. By 1934 she was teaching at the school, and by 1938 she had married her second husband, Melvin Ballerino, an executive at Paramount. She opened her custom business, while still designing for other manufacturers on the side. Eventually her own business took over, and by 1939 she had gained national acclaim for popularizing the dirndl skirt and creating “authentic California designs” for beach and otherwise. 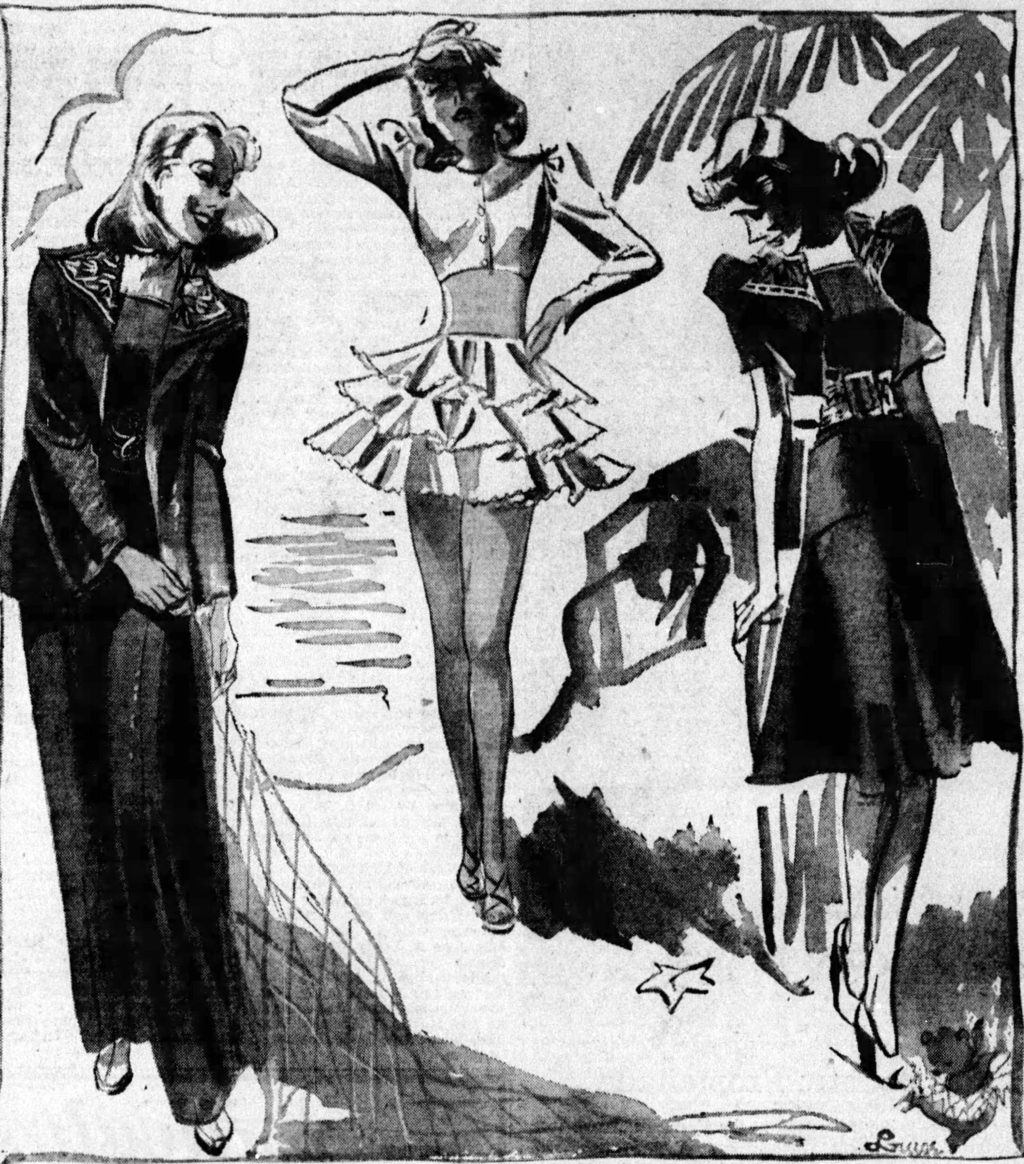 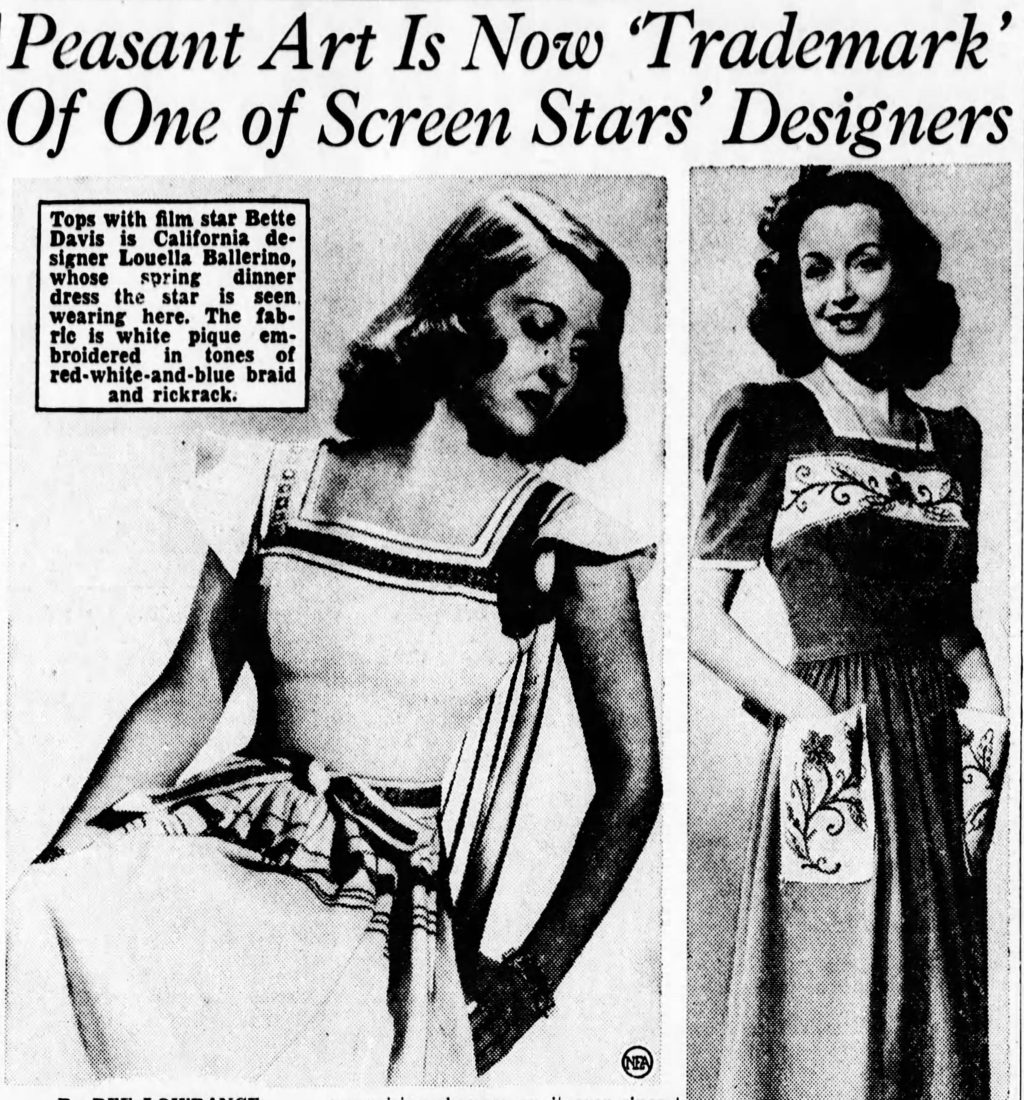 “Exciting fashion news in California’s wholesale market is to be found in the collection of Louella Ballerino, important California designer. There’s real glamor in her late spring and summer clothes for both day and evening. The most fashion-wise Hollywoodites know Ballerino’s designs, watch for the newest and grab them off. That’s why you’ll find Bette Davis snagged the most unusual of her spring evening gowns.” 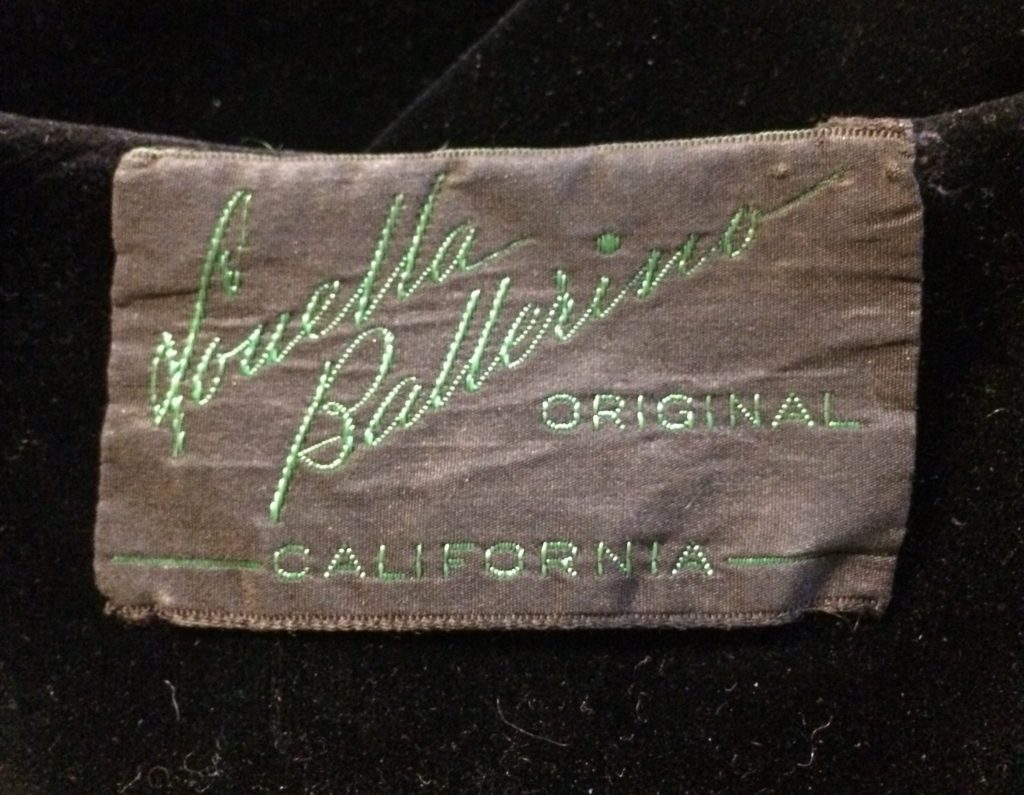 “Back in the days when a gathered skirt was ridiculed and the only embroidery allowable on a ski costume done by Lanz, Ballerino lifted her head out of her wealth of costume books and designed some ‘native’ numbers… As a superbly gifted individualist she felt native inspirations were lovely for costumes. She did them. Well, the manufacturers turned up all their conventional noses… The public loved it!”

Her designs throughout the mid-40s were innovative and beautiful. 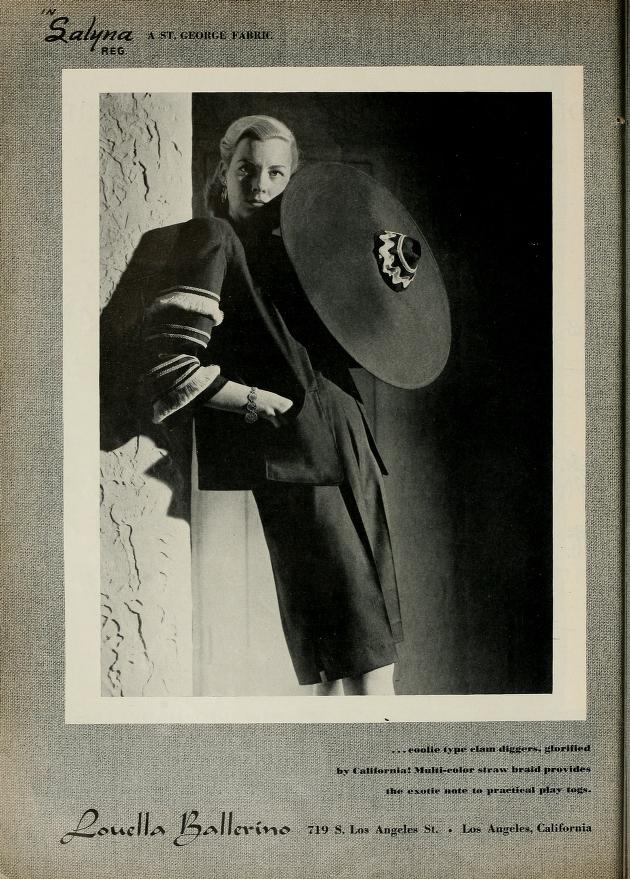 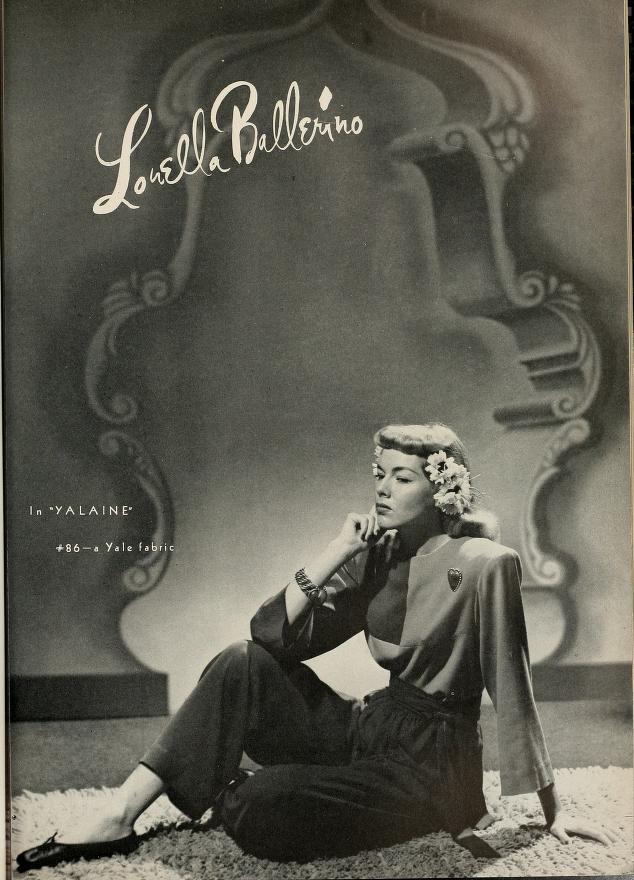 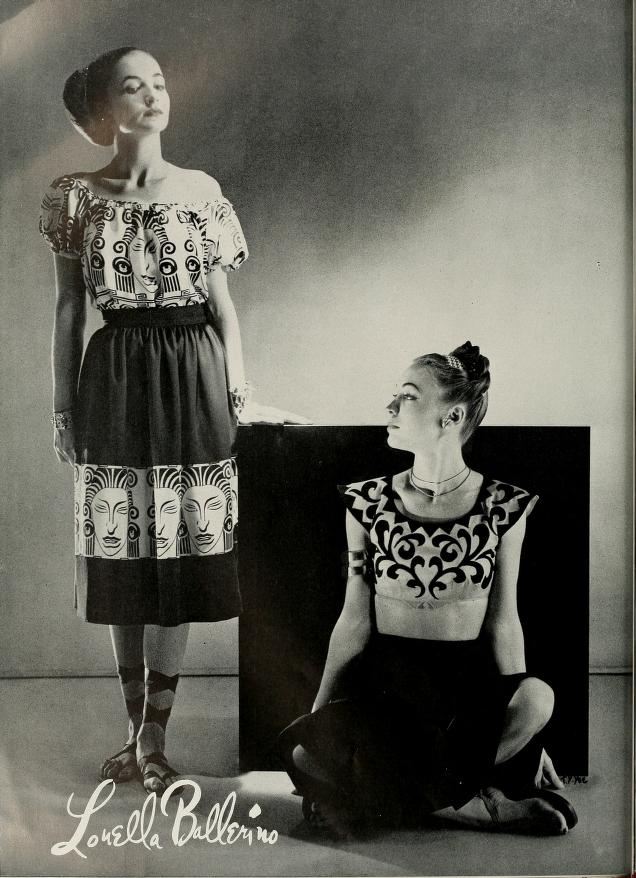 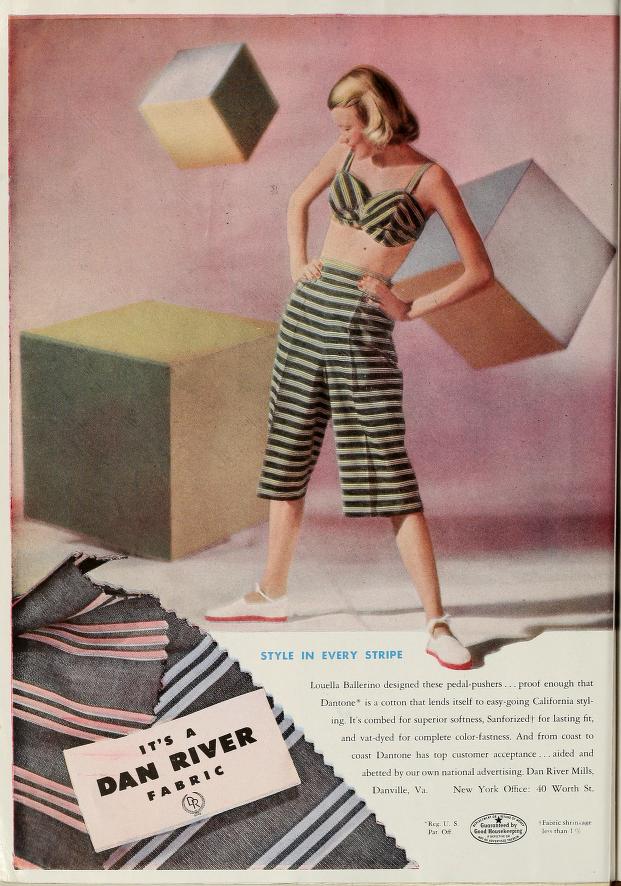 In 1946, Ballerino began a collaboration with Jantzen to produce beachwear. 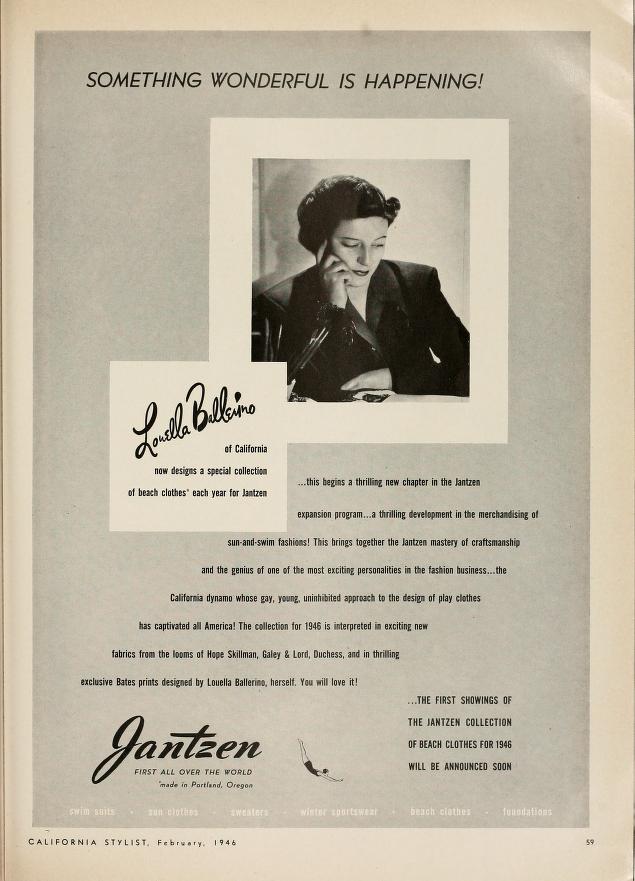 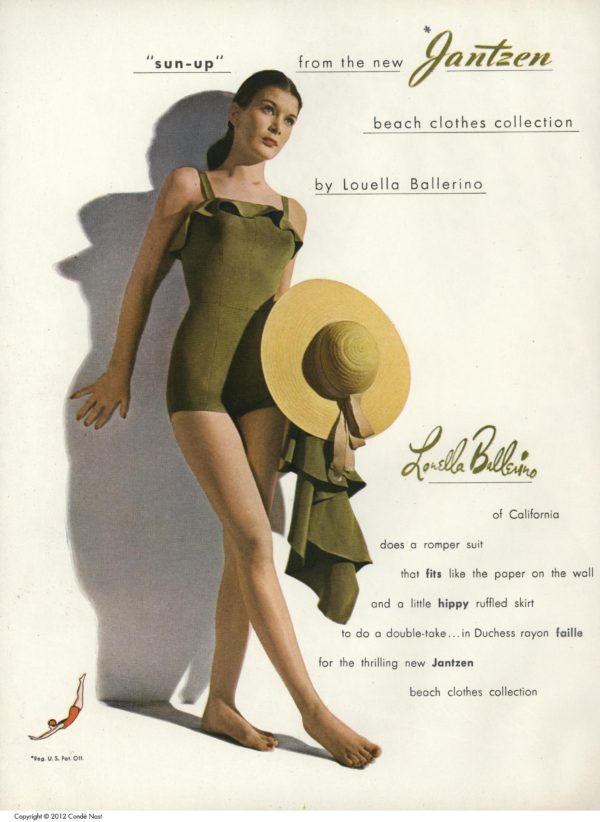 I’ve seen one of these come up for sale in the last few years and would have pounced on it if it had been my size. In the late 1940s, she continued to produce her special blend of American sportswear with global influences (though she herself hadn’t yet traveled to see the places her garments referenced). In 1948, however, her collection referenced early American designs from the mid-1800s. 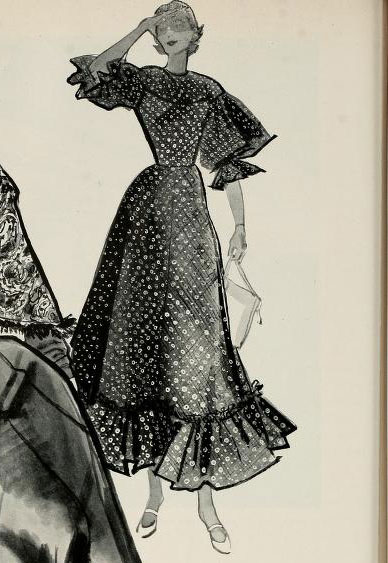 “All the furore aroused by the New Look is a little silly to Miss Ballerino, who finds it but ‘a logical conclusion to things that have gone before. It would have come into being much sooner, were it not for the war… Fashion is a result of things that have gone before. When designers have made all the possible improvisations on one theme, they always make a right-about-face. Then they start over.’ Tomorrow she will go to New York City to begin work on a new line of Traditional Cottons, copied from calico swatches of another century. Going with her is her most prized possession of the moment—a large, unwieldy book containing samples of 1,500 calico swatches used in Paris 100 years ago.”

It appears that this dress came in a few different styles, as well as a separate skirt, that would have originally been worn with a white ruffle-sleeved blouse. 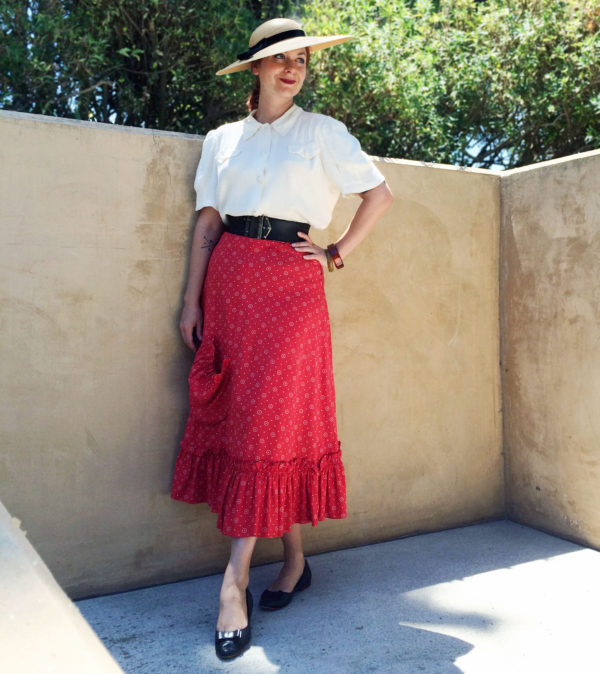 In the following years she continued to design sportswear and resortwear with global influence and California styling, and continued to be popular particularly in California. Though she was heavily influenced by the traditional dress of other cultures around the world, she gained most of her knowledge through books until she began traveling extensively in the early 1950s after closing her business in 1951. In the late 1950s she went to work at Jantzen as chief designer, then in 1958 began working with sportswear maker Phillip C. Phillips to create casual separates. Louella passed away in Laguna Beach in 1978, leaving behind a legacy of California sportswear with a timeless touch. 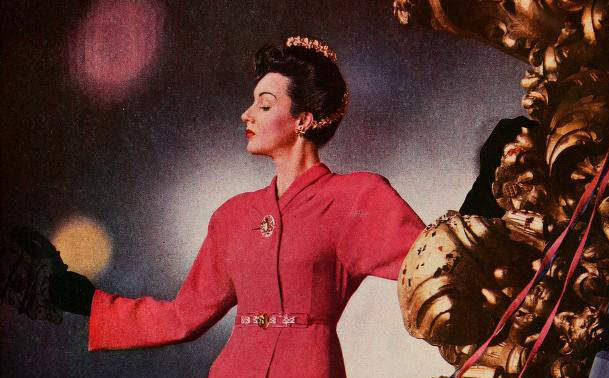 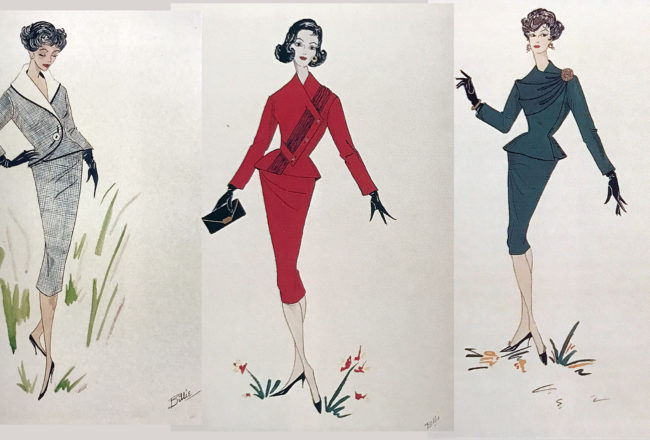 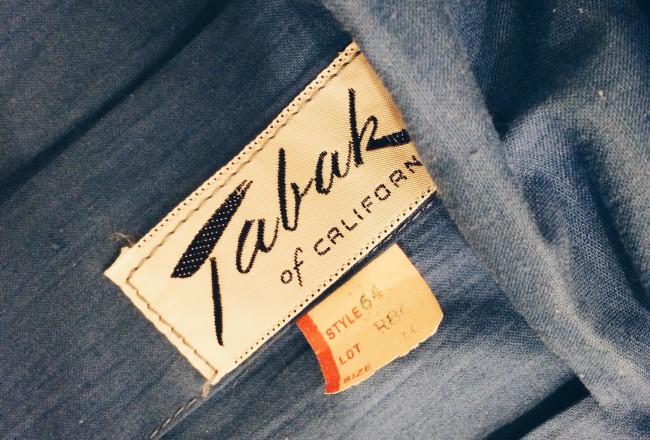