I love California sportswear of the 1940s, and one of the most prominent labels was Graff Californiawear. It was the product of Lena Ceretto and Seymour Graff, an against-all-odds love story that produced some very fashionable slacksuits and play togs.

Lena (Lee) Ceretto Graff grew up the daughter of newly emigrated Italians in a mining town in Colorado, where her mother baked bread and cooked three meals a day for the men in a gold mine, and her father operated a saloon in town. After her father’s death from influenza in 1918, the family moved to Los Angeles where Lee worked as a secretary for a men’s apparel company. It was the start of the depression, and though she desperately wanted to be a surgeon, she needed a job and just couldn’t afford to go to college. “I always joke about this because I find it the best way to hide my hurt,” she said many years later, “but I always wanted to be a surgeon and had a wonderful offer of a scholarship to college. Economically, however, that just wasn’t possible, even with my tuition paid. But I guess I ended up not too far from that because I’m in the cutting trade.” 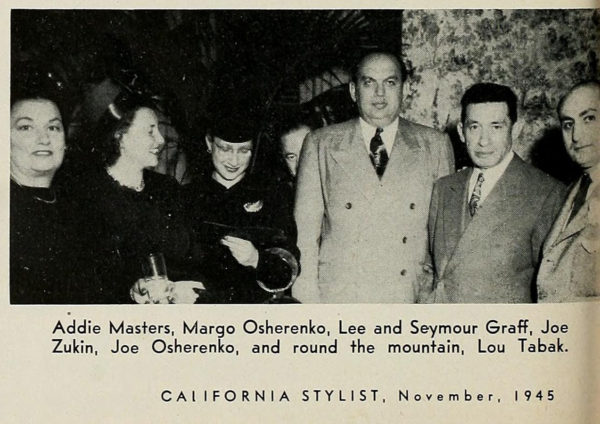 Seymour Graff, meanwhile, grew up in Illinois where he worked as a salesman for his father’s clothing business. His parents had emigrated from Poland and Russia around 1890, and he and his siblings were raised in an orthodox Jewish household. He went to Northwestern to study economics, taught for a while, then got a degree in accounting and worked as an accountant until he decided to move to California to pursue the clothing business on his own. He came to Los Angeles and in 1930 became general manager of the menswear company where Lee was working.

“I still remember the day he came into the office. I was only 19 and as I walked the short distance to the counter to greet him I thought to myself, this is the man I’m going to marry. My boss was out to lunch and Seymour asked if he could wait. I said that would be fine, but I found I was shaking from head to foot.”

The depression was worsening and business was slow, and in January 1933 Lee was fired along with four other employees. Seymour, who was out of town at the time, was furious that as general manager he wasn’t consulted, and quit in protest, along with the head salesman. This was a very bad time to be out of a job, but the three of them—Lee, Seymour and the erstwhile salesman—started their own menswear company out of a house about five miles from where I write this. They opened their doors for business on March 6, 1933, the same day that banks across the country closed theirs. A few days later, an earthquake hit California and their factory was destroyed. “We were too young to be discouraged,” recalled Seymour some 25 years later. “We borrowed nickels and dimes from every friend we had, started in again.”

Five months later, Lee and Seymour eloped in Arizona. “We had been dating, but faced one big problem. Seymour came from a very strict orthodox Jewish family and mine was Roman Catholic. A few months after we went into business, we decided we couldn’t go on the way we were, and Seymour said if I would agree to being married without making it public for two years, he would find a way of telling his mother within that time… the two years turned out to be five. We both lived at home but it would have been even worse if my family hadn’t been so terrific.” His mother, however, refused to ever meet Lee, and Lee decided to postpone having children until after Seymour’s mother either died or accepted the marriage to spare a grandchild the potential heartbreak of being rejected by his or her grandmother. Their daughter Linda was born 10 months after her grandmother’s death.

But despite their early hardships, the company was a success, and in 1934 Lee saw the women’s sportswear business beginning to take off in California and proposed they manufacture women’s clothing instead. Seymour agreed, and Lee went back to school to study design. The new womenswear business began to grow, and they hired five or six additional designers who helped to quickly solidify Graff Californiawear as one of the most popular sportswear brands of the era. “They forged ahead in the sportswear field with some very unusual designs—the broomstick skirt, beach pajamas, tennis clothes. And they were so successful, everybody began to recognize the California sportswear market.” They are often credited with being the first California firm to manufacture women’s slacks and slacksuits, as seen here in a 1940 ad from the Indianapolis Star:

Their timing was spot-on, and Graff slacksuits and separates became synonymous with California fashion nationwide. 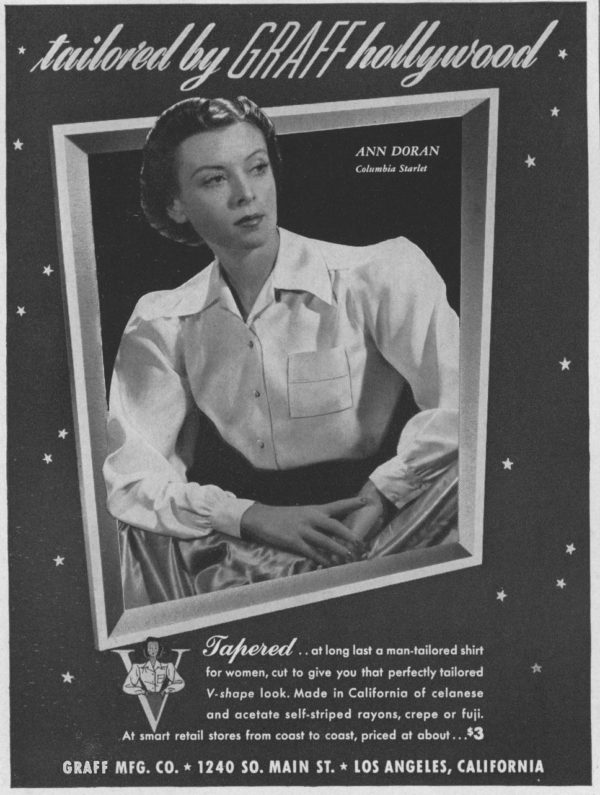 Advertisement as seen in Vogue, February 1, 1941 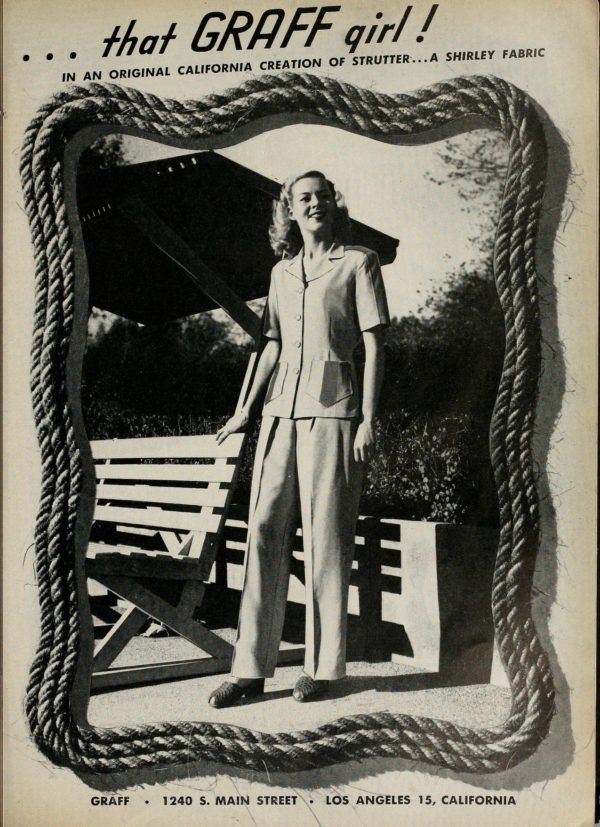 Graff designed clothing for busy, active lives, recognizing that a pretty dress that just hangs in the closet doesn’t earn its keep. Coming up during the depression taught Lee to maximize every fashion dollar. “We try to design our coordinates the same way I like to dress… I still shop the way I learned to when every dollar mattered. I make my clothes work around a hub; then my accessories always go with them, anything I snatch from the closet in a hurry goes with anything else,” she said in 1959. 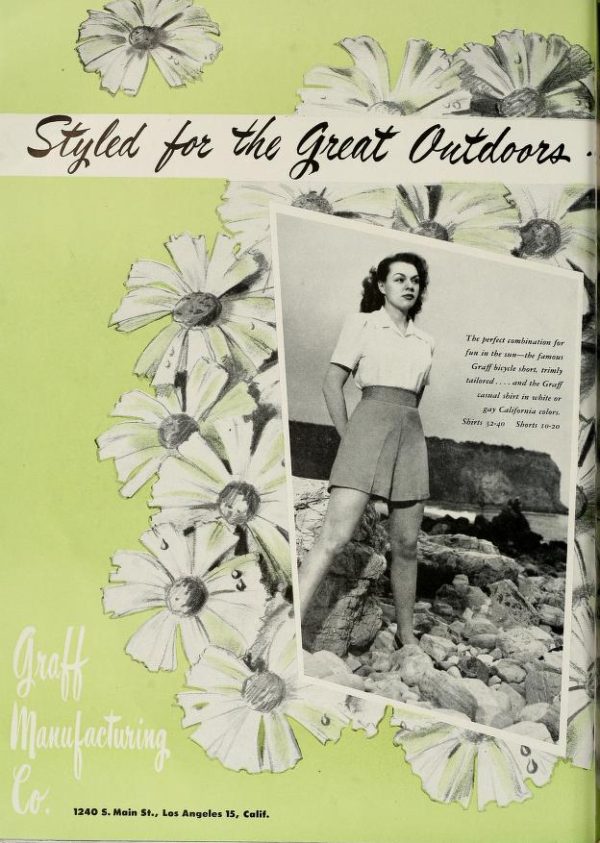 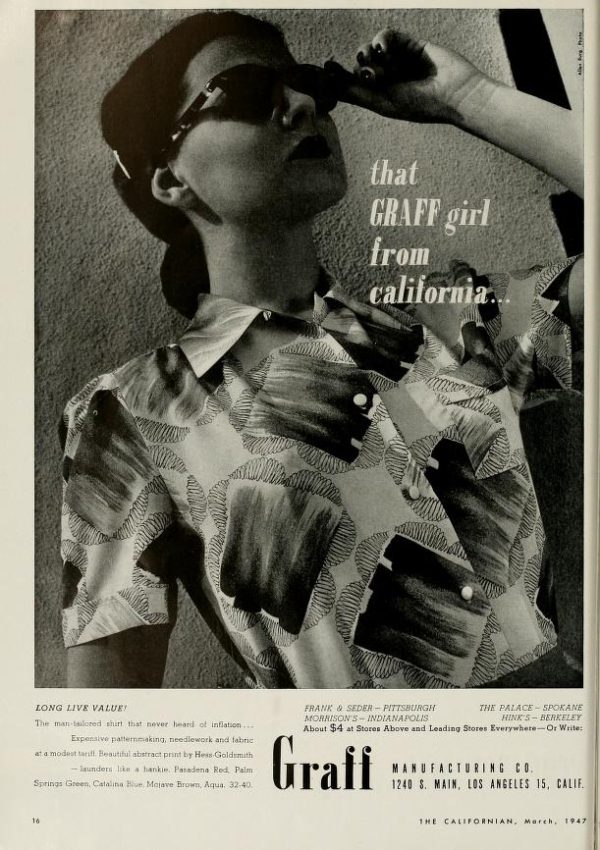 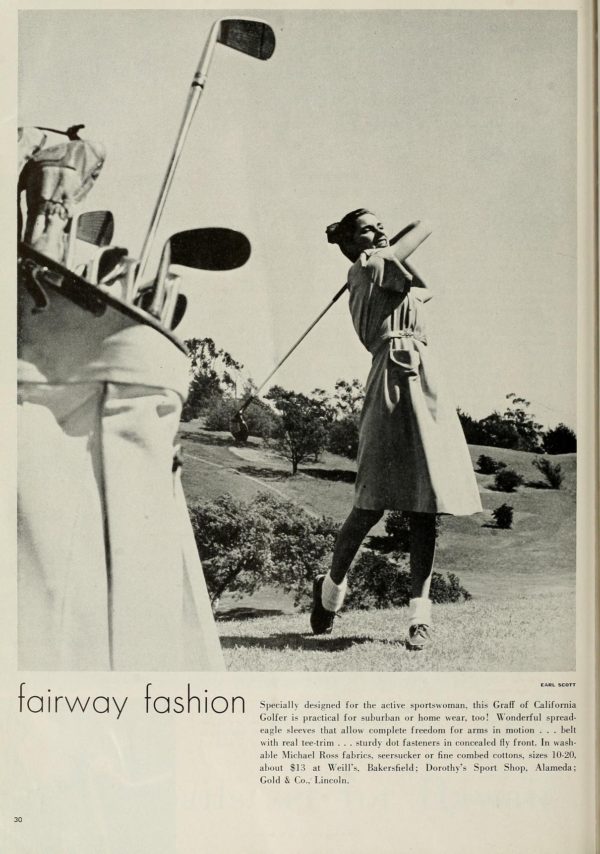 The company somehow survived through the depression, World War II, and the rise of polyester. Seymour died in 1964, and Lee took over the business until her death. “Looking back on my life, I realize I made two very fortunate decisions. First, and most important, was marrying Seymour Graff, and second was going into the womenswear business.” And we are very glad you did, Lee. In addition to running their business, Lee and Seymour were also active in City of Hope and various charities in Los Angeles, giving freely of their time and money. 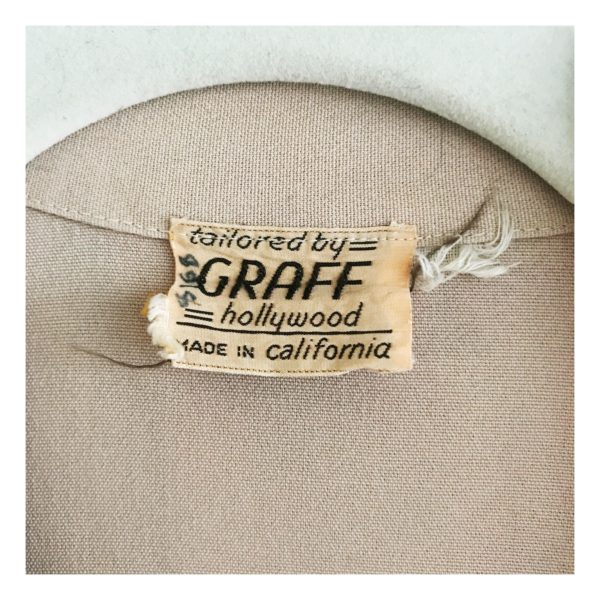 Label from a 1940s slacksuit 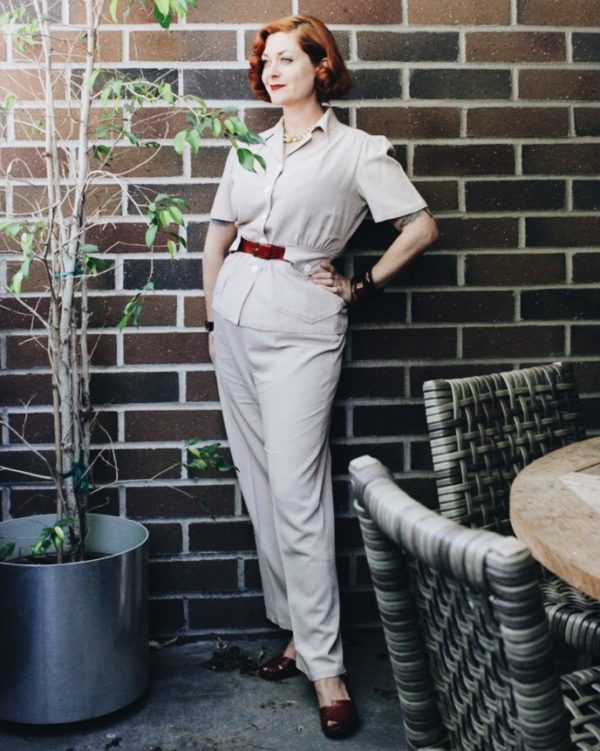