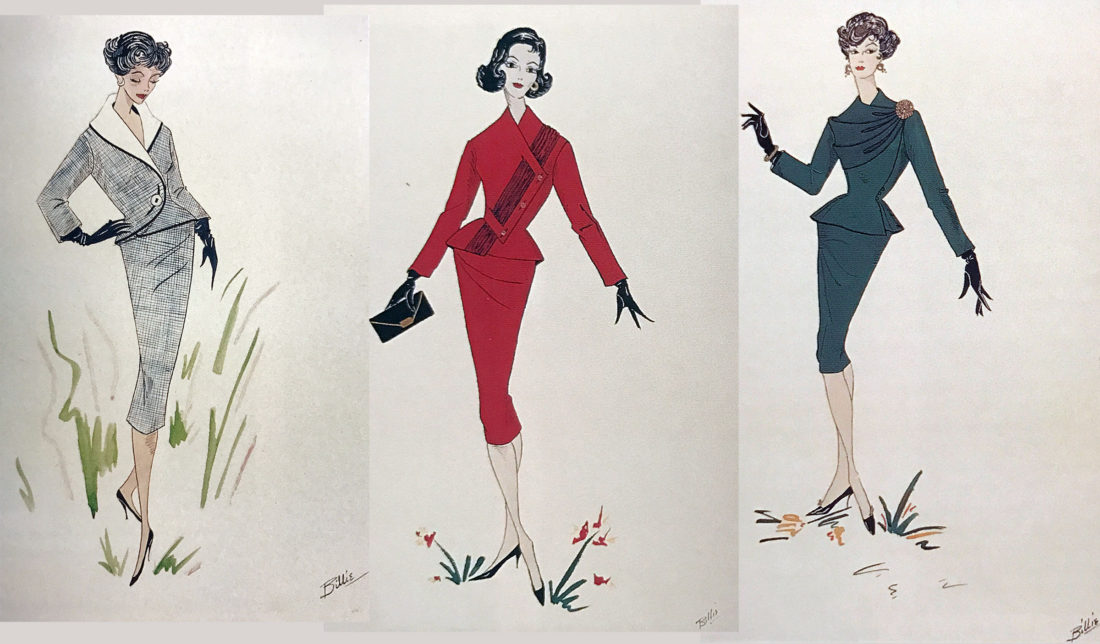 [This post is a continuation of a previous post about the early years of the Lilli Ann company.]

By the early 1950s, Lilli Ann designer Jean Wright was newly married and taking on a more executive role at Lilli Ann. Around 1950, Schuman noticed a new model, Billie Jeanne Dugan, likely during one of his trips to Los Angeles (in addition to the factory and showroom in San Francisco, they also maintained offices in the Gerry Building in downtown LA). She was born Billie Jeanne Eberhart in Laramie, Wyoming in 1930, and at a young age exuded a presence and a beauty uncommon among her classmates. She studied art and home ec, twirled batons in the band, and was a member of the Step-a-Head Dramatics club in high school.

In 1948 or 49, her family moved from Wyoming to Southern California, where she started to get some modeling work. When she was 19, she was Miss North Hollywood, seeking the title of Miss San Fernando Valley (yes, that was a thing). 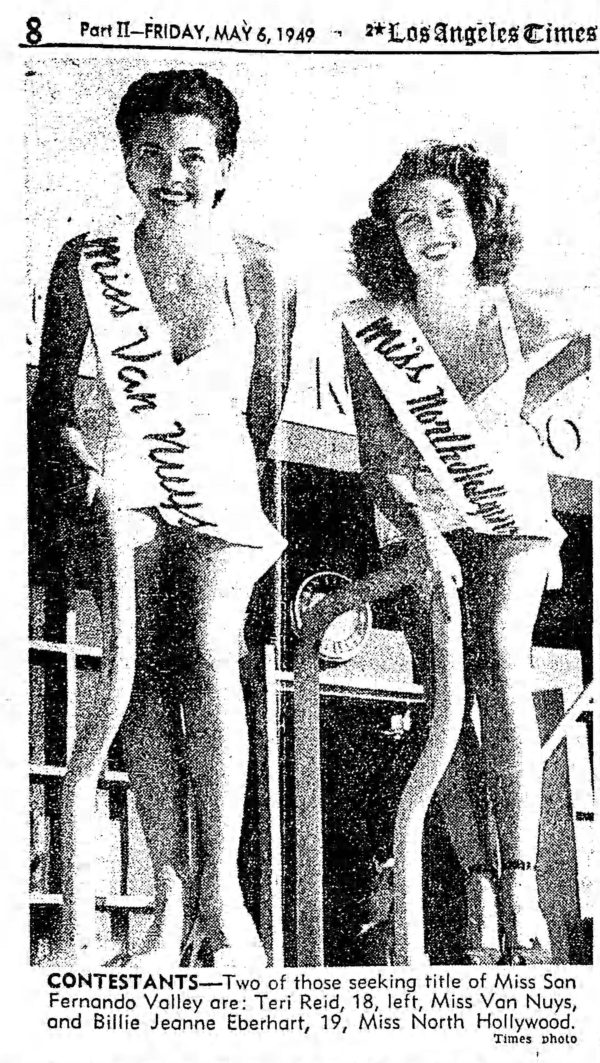 She married Michael Dugan shortly thereafter in 1949, and was probably hired by Schuman as a model sometime in 1950 or 51. Her mother Ruth died in July of 1951 and Billie filed for divorce shortly thereafter. By March of 1952, Billie Dugan was on a plane to Paris with Adolph Schuman, a plane that was also carrying Pierre Balmain. She was 21 years old.

Where the Lilli Ann suits of the late 1940s and early 50s were sophisticated, interesting but not extremely showy; the suits of the mid-1950s began to exhibit some more ostentatious design features, including exaggeratedly flared peplums, giant lapels or sleeves, and a lot of asymmetry. Dugan’s Lilli Ann was different than Wright’s, to be certain. For one thing, she was much younger. She had no formal training as a designer or artist, yet her sketches–a few pictured here–exude a preternatural confidence and understanding about what would be sexy, fashionable and flattering on (tiny-waisted) women. 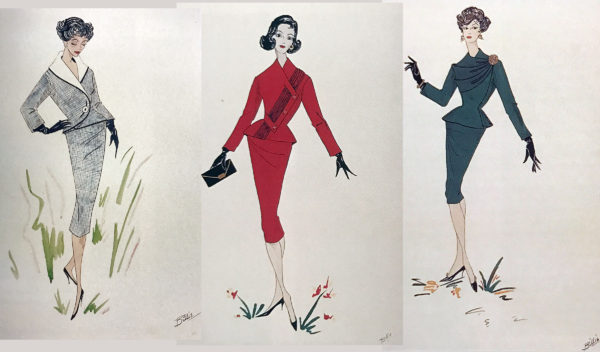 A few of my favorite sketches of Billie’s, from the 1950s

But perhaps the best way to illustrate this is to look at the company’s advertising between 1951 and 1952: 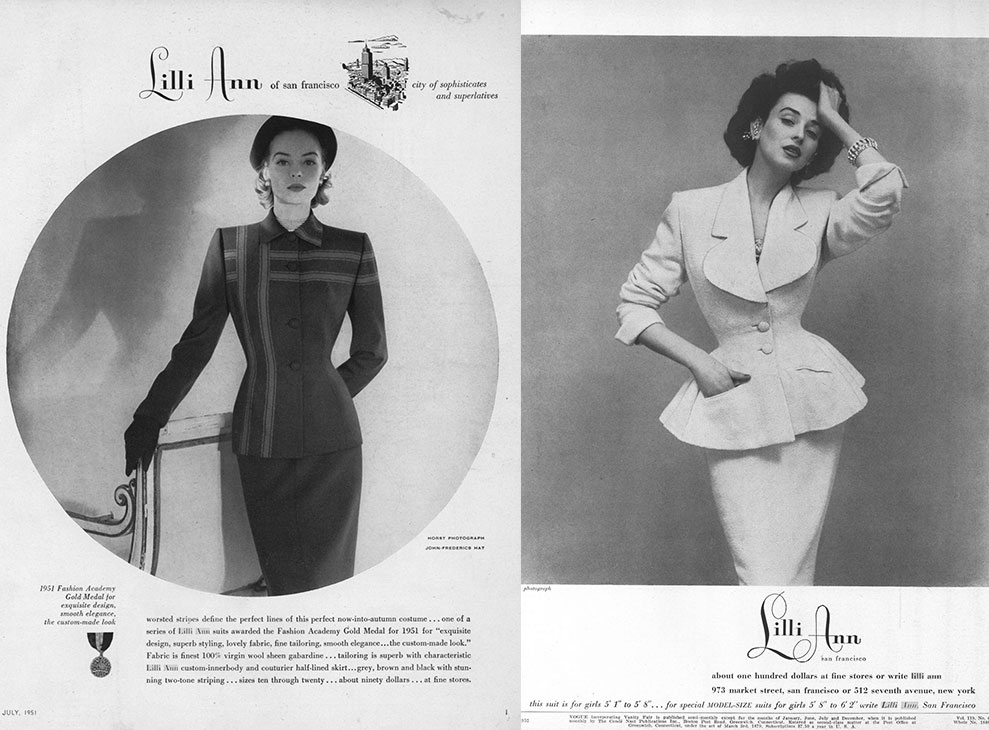 On the left, an advertisement from July 1951, photographed by Horst P. Horst. It still has a 1940s noir feeling, plus strong shoulders and relatively narrow hips (which is perhaps one reason why so many Lilli Ann suits that were actually produced in the 1950s are assumed to be 1940s). On the right, Dorian Leigh models in 1952, shot by Richard Avedon. The jacket is low cut, the pose is transitioned from cool, detached confidence to desire and sensuality. I find it unlikely that the shift from the 1951 image to the 1952 image is unrelated to the hiring of Billie Dugan at this time.

Another aspect of the company’s success was ramping up around this time, the large scale import of fabrics from France (and other parts of Europe). Schumann was something of a Francophile, but he also knew a great business opportunity when he saw it. Schuman’s first big stunt in France was in October 1947 when, as the head of the San Francisco Wholesalers’ Association, he staged an “all-American fashion revue” in Paris to promote California fashions. It was a somewhat odd arrangement. Schuman bought and copied designs from Paris, had them California-ized them for wider and more casual customers, and then brought them back to Paris with a plane full of models, publicists, oranges and palm trees, did a little runway show of what he called “a world premiere of 1948 spring fashions,” a description to which Paris dressmakers apparently took offense and refused to officially attend the show. As the story goes, once they saw the price points and realized there was no competition, they embraced the delegation and praised the designs–for Americans. Here, Schuman poses with some of his models from that first show in 1947. 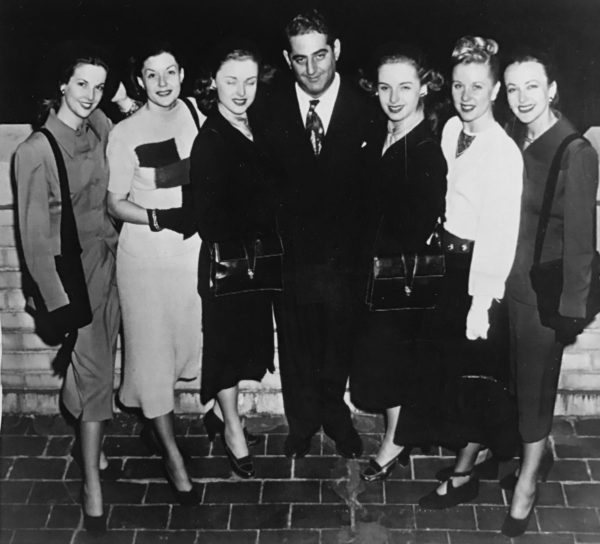 “Six of the San Francisco models who dazzled Paris with a show of American styles recently are shown after returning to New York 10/23 with Adolph Schuman, president of the Manufacturers and Wholesalers Association of Northern California, which staged the show.”

Schuman’s master plan with all this was to sell (a lot of) mass-produced garments in France, but the market was too different. “I guess I was just a blamed fool,” he said in 1952. “I thought we could combine French designing skill with American production methods and have a world-beating team. [But] American production methods are no use in France… in Europe there just isn’t any middle-class market. There are the very rich and the very poor. But the reason for modern efficiency business methods is missing.” In other words, women in Europe were not yet consumers like they were in America. The war had just ended, and the greater needs in Europe were rebuilding infrastructure, restoring jobs and creating opportunity, not providing things to buy. Europe needed to rebuild and produce goods before they could spend money buying them from America. So, Schuman invested in textile and trim manufacturing in France, England and Italy to use in suits and dresses sold in America to those wonderful American women consumers. He worked with textile mills to make production more efficient and ordered enough fabric to keep them busy mostly year round. His rules: “(1) buy abroad only what can not be obtained in the United States; (2) buy only in areas where the cloth has been made by craftsmen for years (i.e., broadcloth in Normandy, worsteds in northern France); (3) insist that mills pay at least 75 cents an hour to their employees. Under the plan, Schuman has imported $2,225,000 worth of European fabrics in the last 16 months. He estimates that he has created steady employment for 2,400 European textile workers, and has produced a $1,200,000 payroll increase in France alone,” wrote Time Magazine in 1953.

And by the mid-1950s, the suits were getting even more interesting. 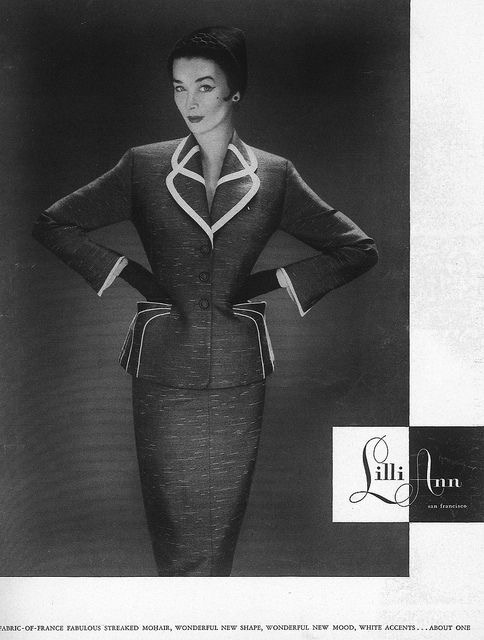 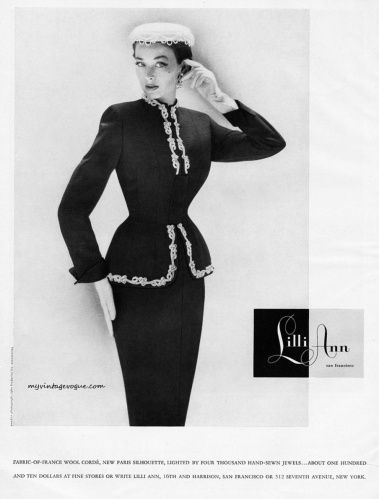 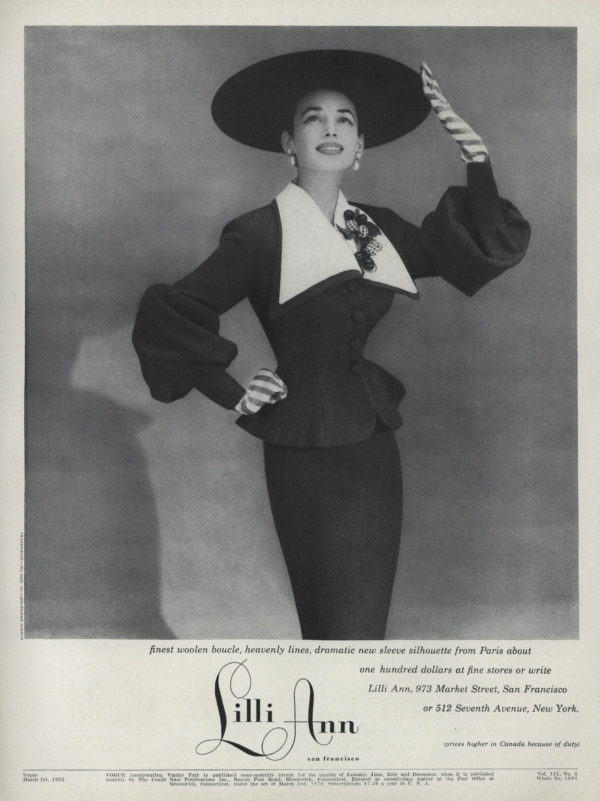 April 1954. The asymmetric closure with side buttons was a common design motif for Lilli Ann for decades. 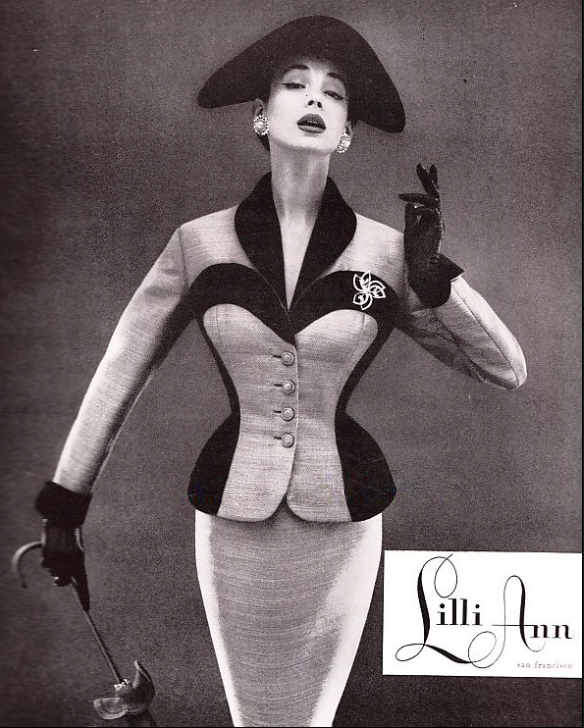 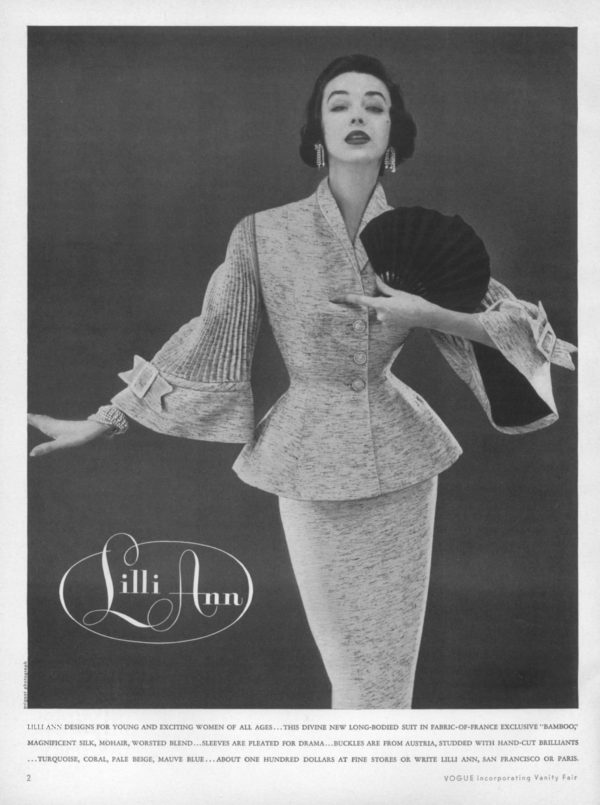 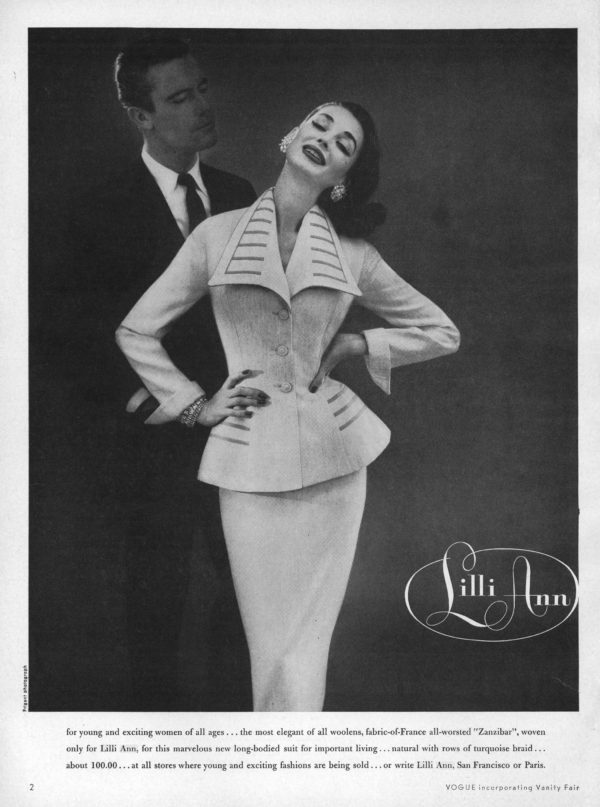 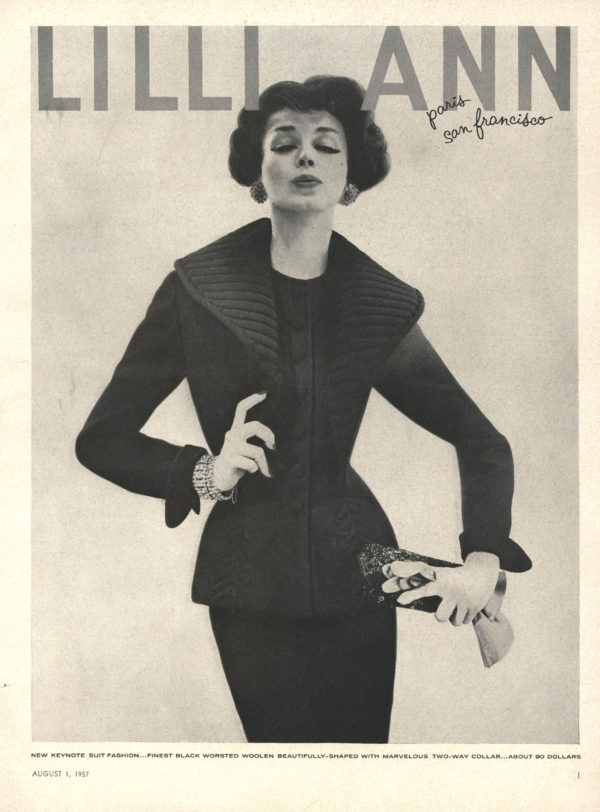 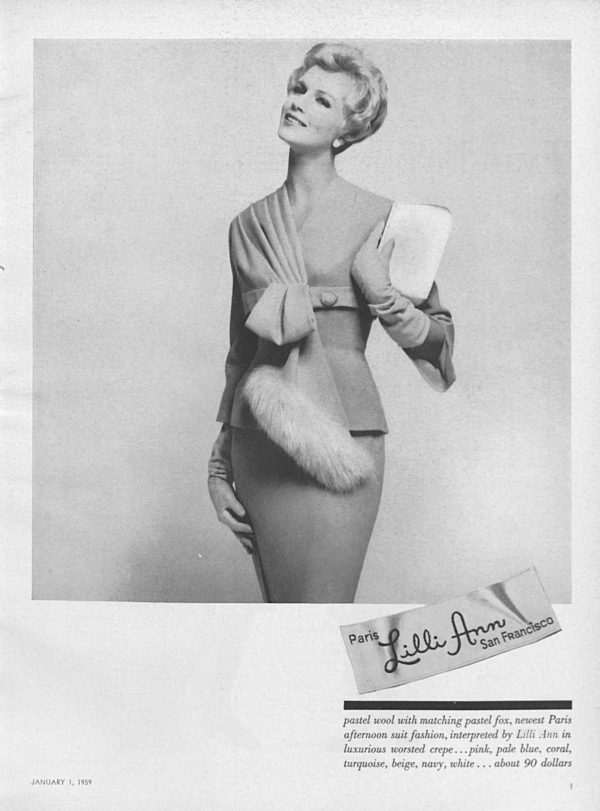 Note that while some of these shoulders are sloping and there are some flared peplums, many of the Lilli Ann suits of the 1950s still had strong shoulders, slim hips and what we think of today as classic 1940s styling. I see so many reputable sellers list documented 1950s suits as “rare 1940s” examples, and while I don’t think they’re doing it to intentionally deceive, a bit of research would reveal that they’re not listing with complete accuracy. Maybe that doesn’t bother some buyers, but it always irks me a little bit, especially when the suit is from like 1954 or later. The bottom line is that the label seen here dates from about 1949 through about 1956. If a Lilli Ann suit has this label, or a label that mentions Paris, it is most likely NOT a “rare 1940s” example. For more about labels, see previous post. 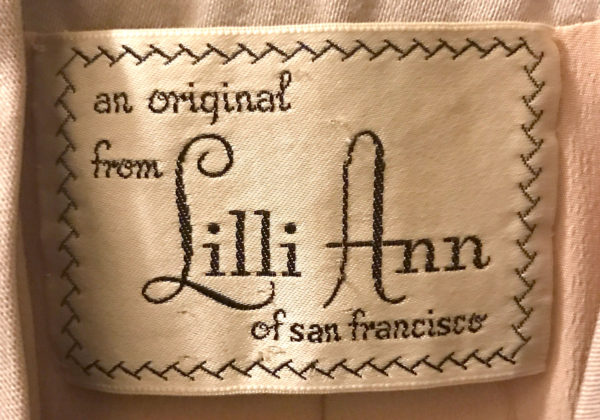 Billie designed for Lilli Ann until at least 1958 when she remarried, and possibly a couple years longer. She and her second husband Aaron Raboff, CEO of Helms Bakery, had a daughter Peri Lee in 1960 and lived in Bel Air until Billie died—apparently quite unexpectedly—in 1962. She was just 31 years old. No cause of death was given in her extremely brief obituary, which makes no mention of her career. Her daughter also died extremely young, at the age of 26. The company had other designers (also, they sometimes blatantly copied well-known designers like Irene, and it’s rumored that Balenciaga contributed a few anonymous sketches), and Schuman continued to be heavily involved until his death in 1985. But the 1940s and 50s for Lilli Ann have proven to be a source of fascination and high demand from collectors who still respond to Schuman’s marketing efforts and his designers’ talent all these years later. 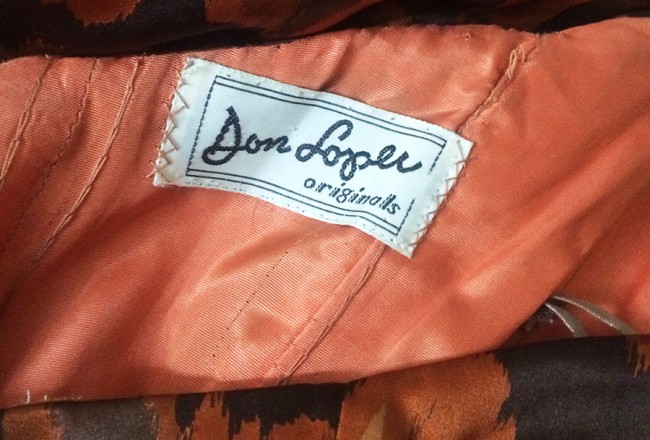 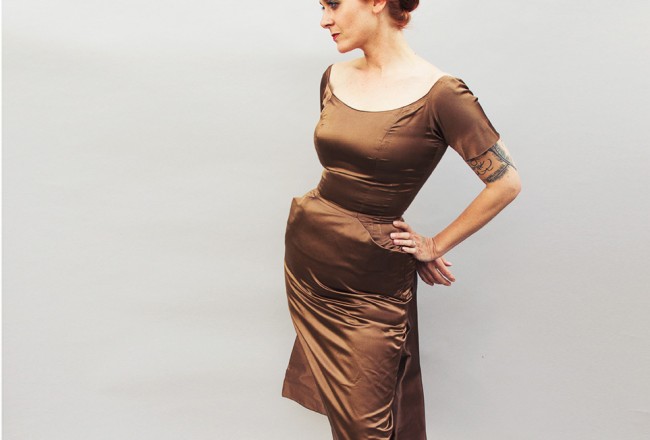 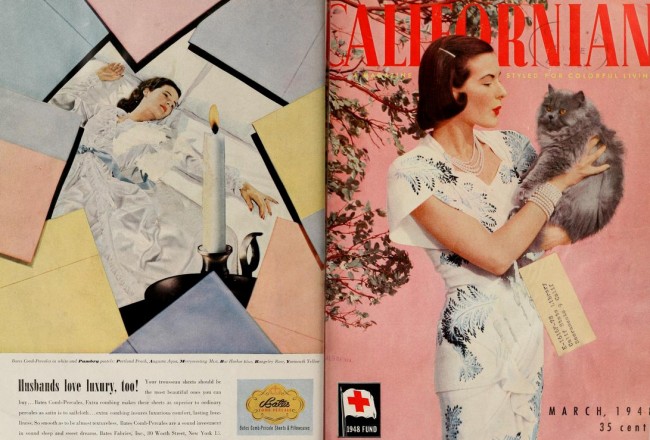