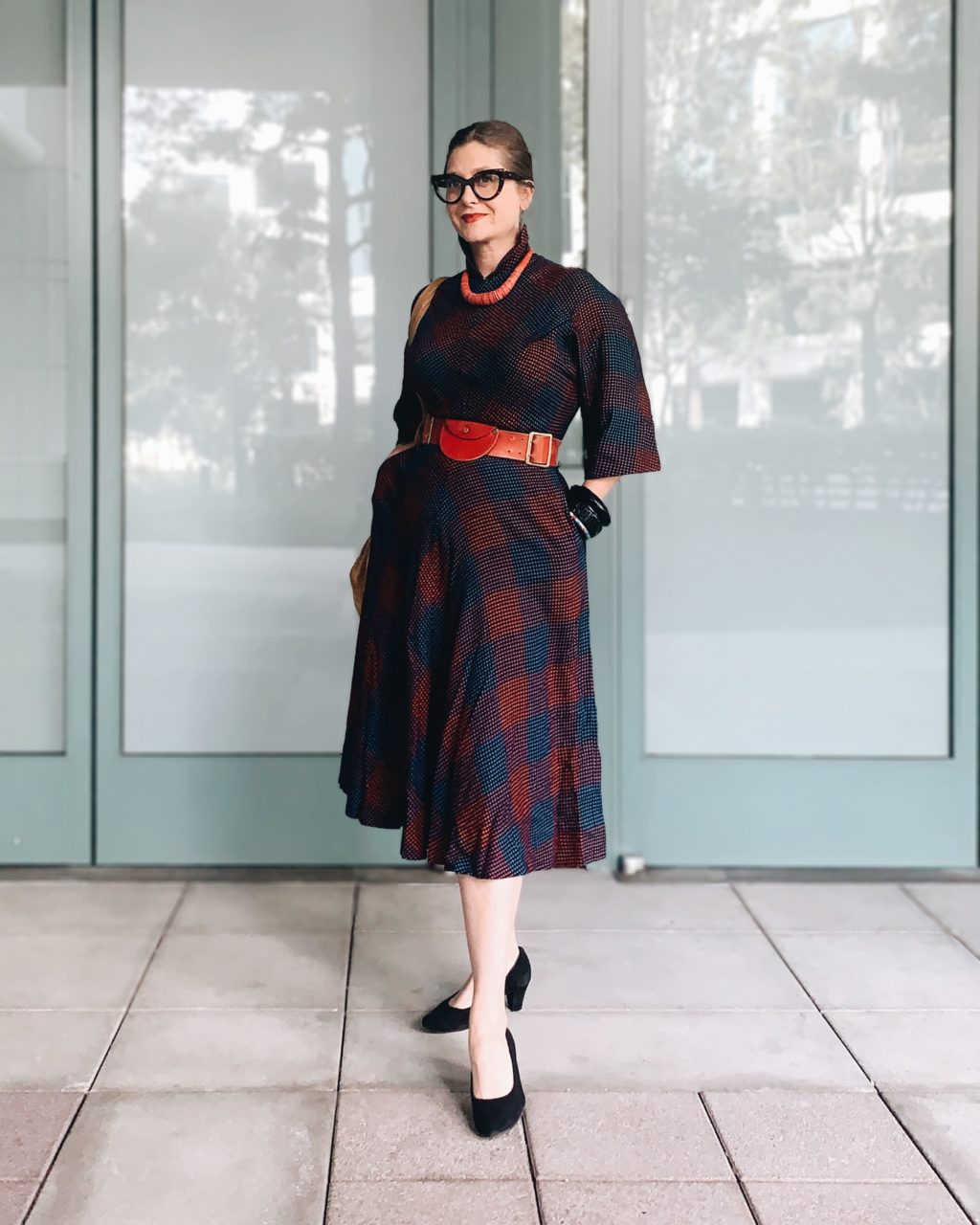 De De Johnson was born Delores Henderson in Missouri in 1901 to Mary and Orian Henderson. Mary was just 17 when she married, and I can’t imagine her life was easy. In Kansas City, Orian worked in construction while Mary stayed home and tended to babies, three of which died before Delores was born. At some point before 1908 the family moved to Los Angeles, and Orian left his wife and children for Oakland shortly after De De’s brother’s birth in 1912. He would not return, and probably died sometime around 1925. In interviews, De De suggested that her mother worked as a costume designer at MGM, dressing stars like Joan Crawford, and had taught her how to drape fabric and design clothing to fit. While I couldn’t find anything to support her claim (in 1920, Mary was working as a hotel maid and died in 1934), De De certainly learned how to make beautiful clothing somewhere. Instead of going to high school after 8th grade, she helped to support her family by going to work as a salesgirl in a dry goods shop. She married Jon Johnson, a motion picture sound technician, in 1933 at the age of 32 (though her age was reported in the paper as 28 – De De routinely fudged her age by a decade or more over the course of her career). 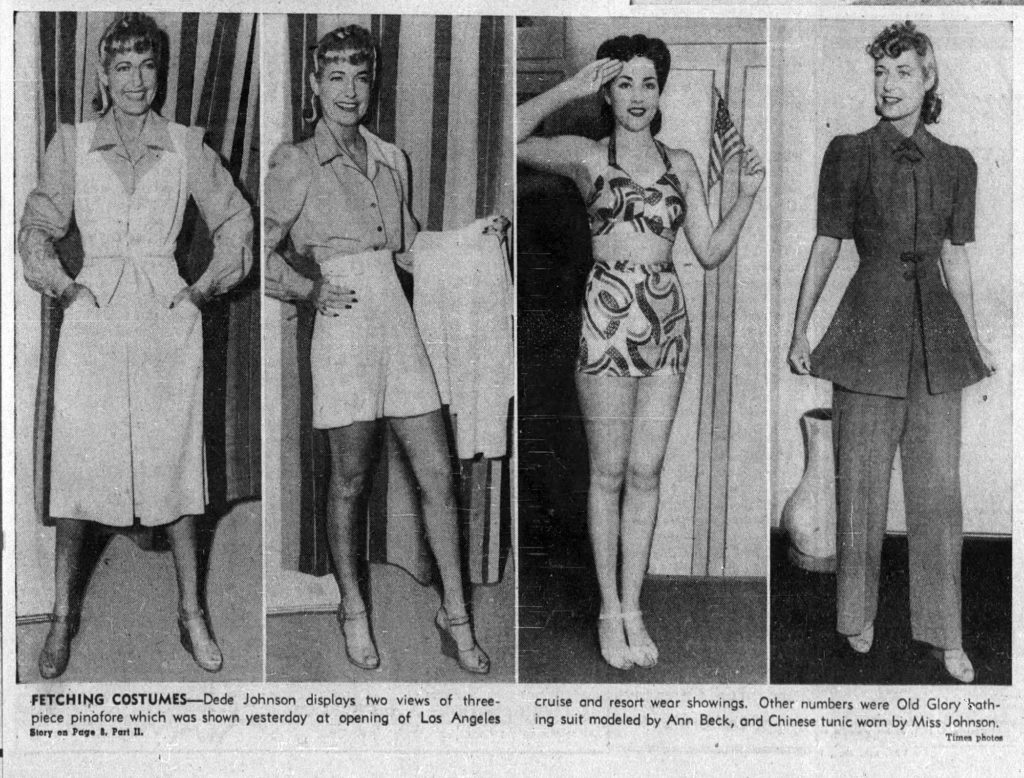 Throughout the 1930s and early 40s, De De worked as a model and salesgirl in addition to trying her hand at millinery and costume design, through which she gained more experience than notoriety. However, in 1942 she married Harold Kronthal, who would be instrumental in creating her identity and financial success as a designer. Harold came from a textile background; his family had been engaged in trading silk and lace in New York for decades. “It really pays to have a husband who has been in the fabric business all his life,” she said in 1952. “The manufacturers can’t fool him when it comes to fabric.” In 1941, Harold left his first wife and daughter in New York and moved to Los Angeles to open a west coast fabric business, he married Delores Johnson in 1942, and in 1943 with his investment of $5000, they started DeDe Johnson, Inc. The venture proved extremely successful. 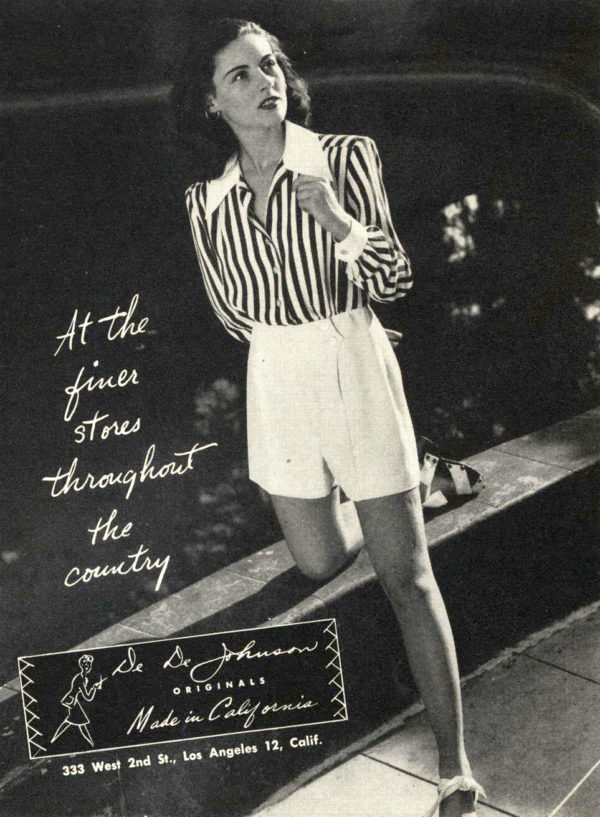 Her first triumph came right away with California causal separates, particularly pedal pushers. The term had been used for decades to refer to bicyclists, but only in the early 1940s did it start to refer to the garments worn by women to effectively ride without having to resort to slacks, which were not yet appropriate street wear in 1942. Gasoline was rationed, so bicycles became a bigger part of daily life. “This new slack chopped off just below the knee––yes, at approximately our normal skirt length––grows more vitally important each hour. And one of the leading Los Angeles manufacturers calls theirs pedal pusher slacks––thinking about bicycles, and war time needs for them, of course,” reported the Fresno Bee in July of 1942. This leading Los Angeles manufacturer was De De Johnson. Not quite a split skirt or culottes which looked more like a skirt from a distance, De De’s version was more tailored, clearly short pants. Suddenly, in the summer and fall of 1942, pedal pushers were everywhere, and everyone was making them, making it difficult to tell whose really came first. At any rate, she was credited as the originator by the Apparel Manufacturers of Los Angeles in 1944, an honor for which she received a gold trophy. 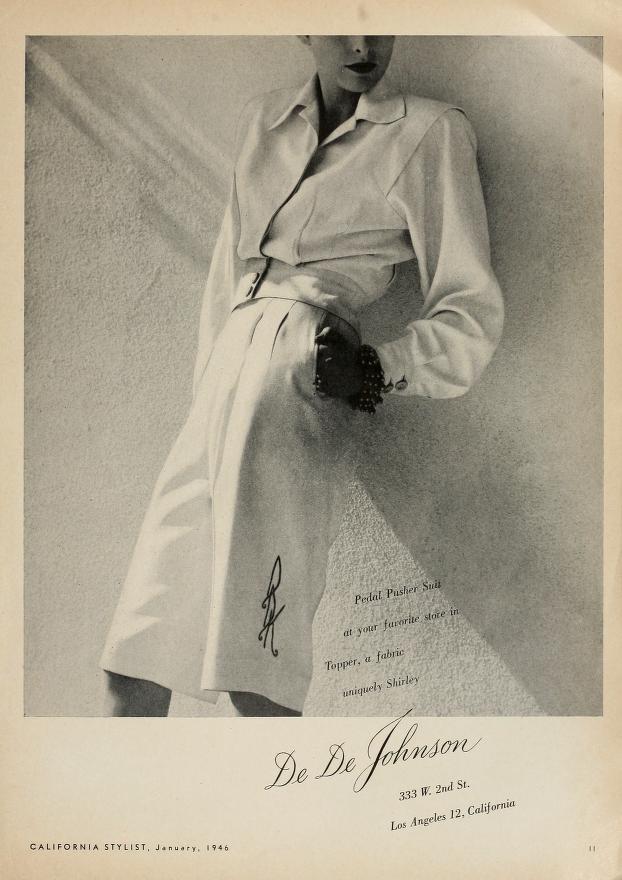 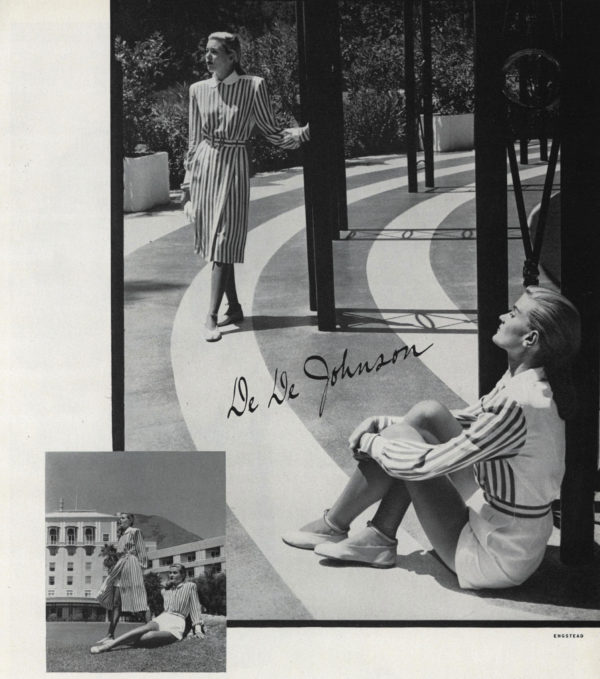 De De was vivacious, beautiful, trim and youthful for her age, which was actually a full ten years older than she claimed to be. In 1946, while modeling at her own fashion show, she fell over the railing into the Grand Canyon and emerged from a rescue operation two hours later with little more than a sprained ankle. The press coverage reported her age as 33. She was, in fact, 44, which may explain why so many articles from the 1950s make note of her “prematurely gray” hair. In the 1940s and 50s, she was known mainly for sportswear, and in the 1960s she began to include cocktail dresses and evening wear in her collections. Her resort collections were always strong. De De Johnson died in Los Angeles at the age of 97. 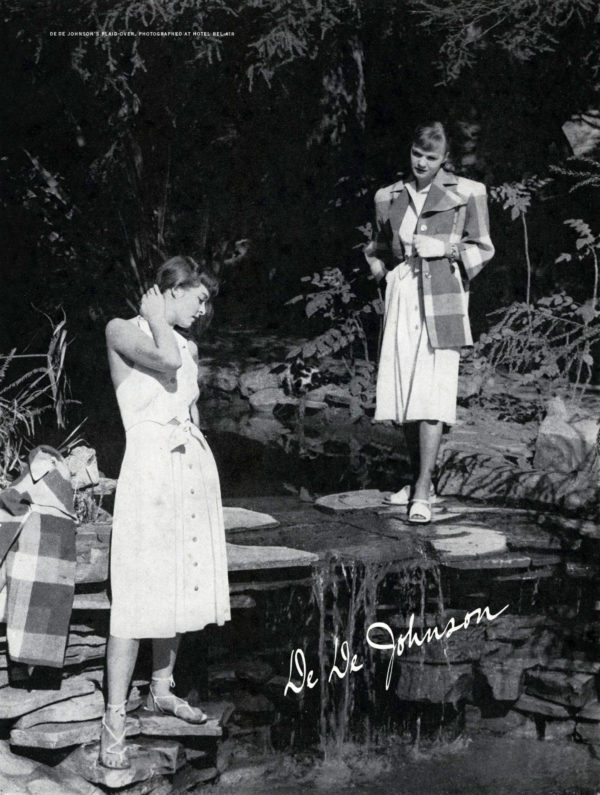 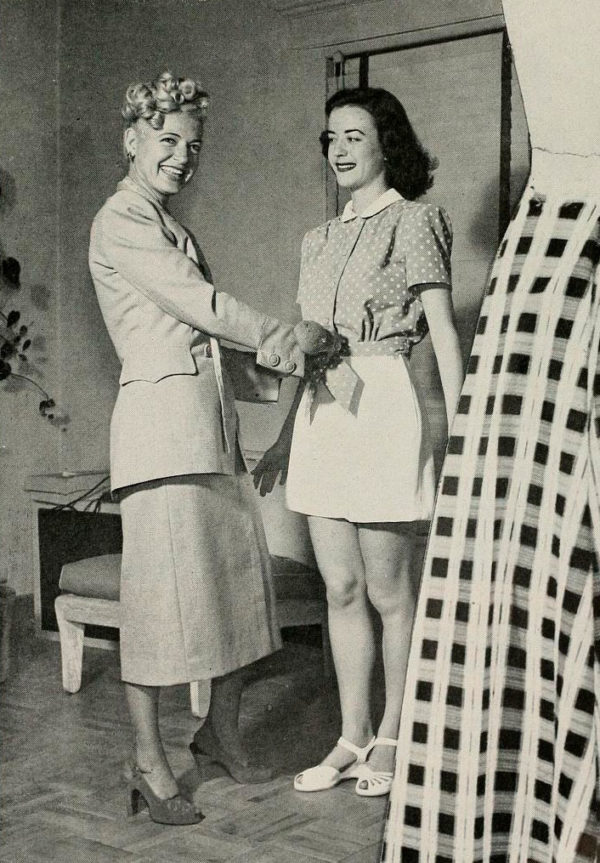 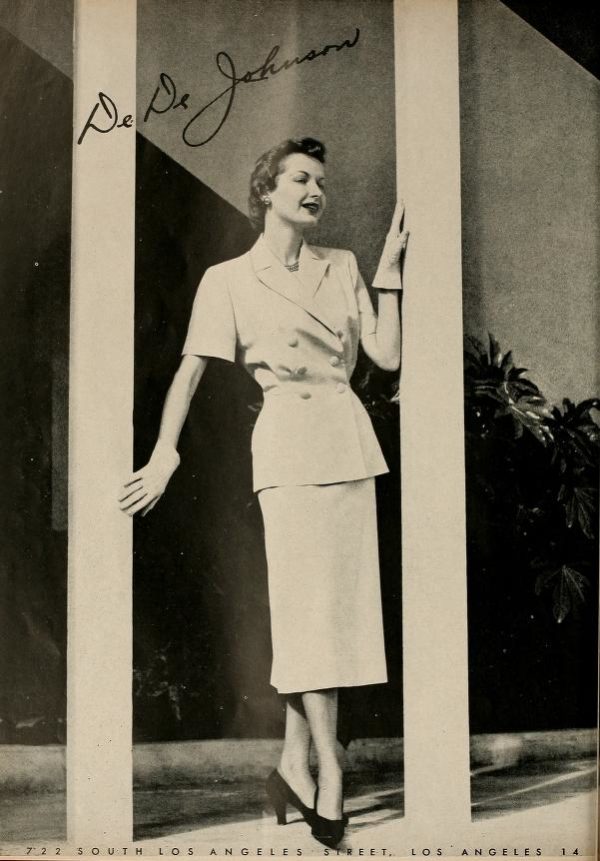 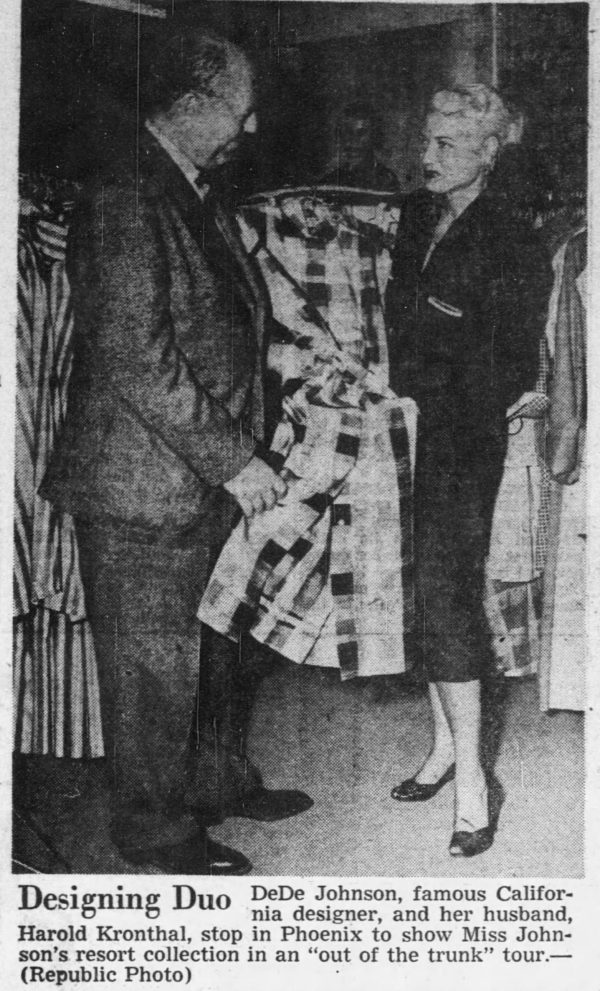 “DeDe certainly looks just like a designer should—prematurely gray hair, enviable year-around tan, and a trim figure. And her philosophy for living—full life, lively imagination and vivacity—is reflected in her designs. ‘Formal clothes are wonderful,’ says DeDe, ‘but after all, casual living requires about 14 to 18 hours of her day.’” Arizona Republic, March 4, 1952. 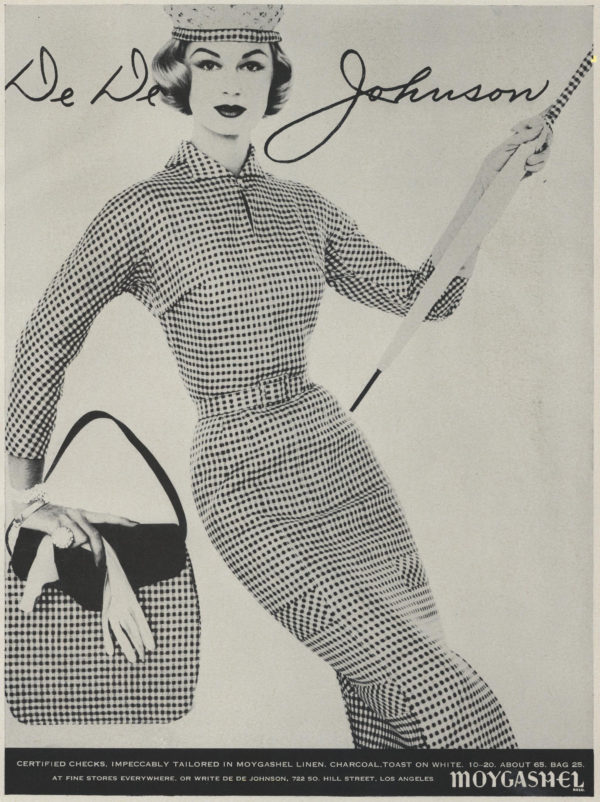 De De loved linen and worked with it throughout her career. Note the design similarities between this dress and the one I’m wearing above.