(Just as a brief disclaimer, this post assumes some basic knowledge about Charles James. If you’re not familiar, this is an excellent primer. I’ll wait.)

In 1954, Charles James, a brilliant and paranoid couturier (credited by Dior with inspiring his 1947 New Look) with a strong disdain for mass production entered into an agreement with Samuel Winston, who by varying accounts was either an established high end retailer or a simple blouse manufacturer whose business was ready to plummet into disaster at any time.
[zephyr_quote author=”Palm Beach Daily News, Feb 5, 1967″]Samuel Winston had been working in the dress business in New York since he was a teenager. “Born in New York City, Mr. Winston got his first job as a piece goods buyer, and added experience as a youthful and ardent dress salesman. After a brief whirl in a retail shop, he switched back to wholesale manufacturing when he organized Milmont Gowns and became its vice president. In 1950 he founded Samuel Winston Inc. and engaged Roxane and internationally known Charles James as his designers.”[/zephyr_quote]

James was to provide a collection of 30 designs each year over the course of two years, including day dresses, evening gowns, and separates, but by 1955 his (possibly justified) paranoia and propensity to think everyone was stealing his ideas prompted him to cease work after producing just twelve garments. He argued that his designs were being used on Samuel Winston dresses, unlabeled or under the Roxane label, but either way without proper credit. Samuel Winston sued for breach of contract in the amount of $61,341, and James countersued for $250,000 (or $500,000 depending on which source you believe – this number is from a 1998 New Yorker Article), charging breach of contract and unauthorized copying of his designs. 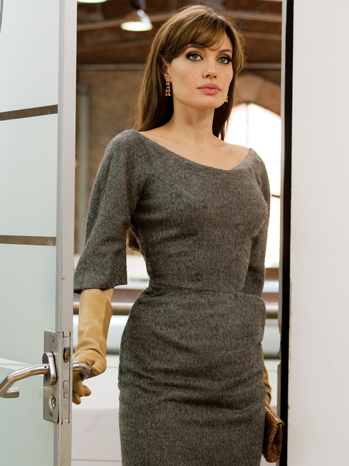 Angelina Jolie as “Elise” in Columbia Pictures’ THE TOURIST.

The most well-recognized example of a Charles James for Samuel Winston dress was, for some reason, worn by Angelina Jolie in the 2010 film The Tourist. This dress (or, one like it) sold for $12,000 on 1stdibs.com.

Different accounts tell the sordid litigious tale differently; some sources indicate that James’s designs were always to have been labeled as Charles James and never imitated, others indicate that Roxane could knock off the designs after a season had passed. Either way, James alleged that his designs were used in Roxane’s collections, and he was eventually awarded nearly $20,000 in back pay and damages, but not for piracy, partly because James’ eccentricity and disorganized evidence prevented the judges from fully understanding and believing his claims (I read this in a snippet from the decision, but if anyone has access to the full text, I would love to read it!). Still, between the money he’d spent litigating the case and the money he owed in back taxes, the result was a broken (and broke) Charles James, who would continue to shake his fist at the American fashion world, the demise of couture, and the prevalence of piracy until he died in his Chelsea Hotel room in 1978.

Meanwhile, Roxane Kaminstein, the woman who James claimed stole from him, went on to a lovely career as a designer and couturier with Samuel Winston, winning multiple awards for her designs, including the Coty Award in 1960 for her beaded evening wear. From her perspective, she “worked with” and was inspired by James during that period. From his perspective, “The manufacturers and designers aided by people like [Vogue Editor-in-Chief Diana] Vreeland who market the ideas of the couturier on the volume level, call them their own, and don’t pay for them” comprised the most vile and dishonest sectors of society. (New York Magazine, October 17, 1978).

This is a Roxane for Samuel Winston: 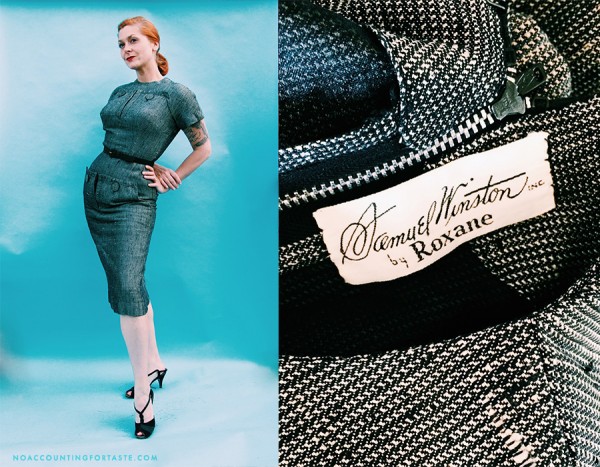 I don’t suspect that this dress was stolen or heavily influenced by Charles James. It’s a simple but sexy day dress in a woven silk, probably later 1950s.

[zephyr_quote author=”Palm Beach Daily News, Feb 5, 1967″]“Roxane of Samuel Winston is a quiet, reserved and yet potent personality in American fashion. She drifted into the realm of dress designing after years as an executive buyer for a large New York buying office. She attributes to this long experience of analyzing and choosing ‘what the lady wants’ her seemingly infallible sense of of wearability, no matter how advanced the silhouette or how luxurious the effect.”[/zephyr_quote]

[zephyr_quote author=”Vivian Brown, AP newswire, November 1972″]As a couture designer for Samuel Winston for 18 years, Roxane did her own fitting and draping. In addition to originating her own collections, she worked with designer Charles James and executed collections for Cecil Beaton and Valentina.[/zephyr_quote]

Something tells me James would have taken issue with the phrase “worked with.”

Anyway, when I found today’s Fancy Friday dress, I immediately thought of this quote from Eleanor Lambert, Charles James’ publicist in the 1950s:

[zephyr_quote author=”Eleanor Lambert, fashion publicist”]Everyone in the fashion world agrees that Charlie was a genius. Unfortunately, even a genius must be part of a business collaboration, and Charlie always resisted that. He did wonderful, individual clothes. He was the first designer I ever saw mix satin, velvet and taffeta. His skirts were beautifully draped. But that kind of dressmaking is past. It’s too costly.[/zephyr_quote]

Which brings me to this dress. The top is black crepe, the bodice and hip are black velvet, and the skirt is taffeta. Sidenotes: my apologies for not steaming this before snapping this pic. I was too eager and it was getting dark. Secondly, the dress has been shortened from its original length, but the fabric is preserved, so at some point I’ll put it back. 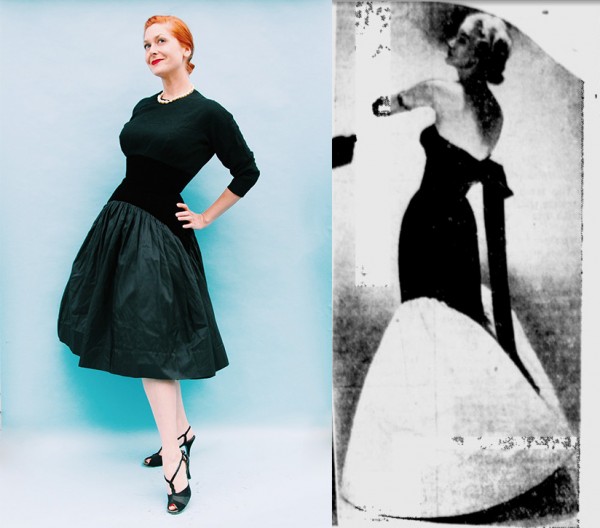 On the left, my dress, with a Roxane for Samuel Winston label. On the right, a Charles James for Samuel Winston. “Giant hem pouffs of white silk faille accent this startling evening dress of closely modeled black velvet designed by Charles James for the fall and winter 1953-54 Samuel Winston Collection.” From the Milwaukee Sentinel, July 19, 1953. I have zero doubt that Roxane was at least influenced by James when designing this dress, if it’s not an outright copy.

Anyway, these are both dresses to keep and a label to look out for. And for the moment, these are not for sale 🙂 Have a great weekend!