Wedding season: what to wear?

Every fall since I turned 30, I’ve noticed that September begins a string of nuptial celebrations that lasts until November. Growing up I used to think that June is wedding season, but it turns out that (in LA, at least) the best time to get married is the early fall. It’s still warm outside, there’s very little chance of rain (let’s face it, there’s very little chance of rain here to begin with) and some venues are–or were, before this trend began–less expensive than they would have been in the spring. This fall there are three weddings I’m attending, so I thought I’d give a little insight into how I choose what to wear to a wedding. Actually, it’s more just like me playing dress up, so business as usual. Let’s begin, shall we?

I have three basic rules surrounding what to wear to someone else’s wedding: 1) it has to be danceable (shoes included), 2) it has to reflect the couple’s aesthetic to some degree, and 3) it has to make me feel fabulous–but not too fabulous, mind you. It’s not my show. My first option for this weekend’s wedding was a royal blue taffeta cocktail dress by designer Marusia. 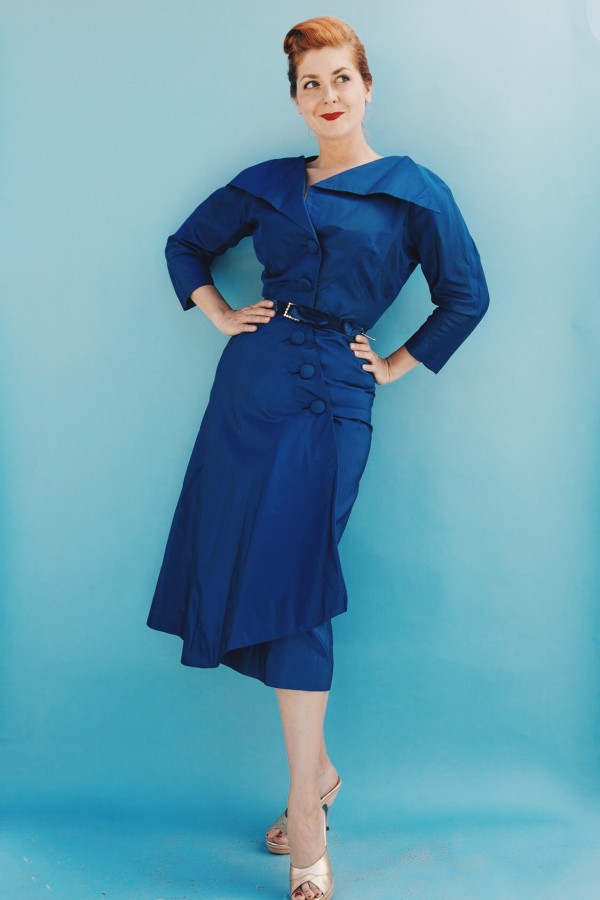 If you’ve never heard of Marusia, that’s understandable. She was, for a very short time, included among the heavy hitters of California couture, mentioned by LA Times Fashion Editor Fay Hammond in the same breath as designers like Irene, William Travilla, Don Loper, Helen Rose and Howard Greer, described by Ms. Hammond in 1951 as “the dramatist of California couturieres.” In the late 1940s and early 50s, she had an exclusive agreement to design for Saks Fifth Avenue, where her creations ranged from about $125 for a crepe day dress to $325 for a dramatic evening gown (you can basically just add a zero to that to adjust for inflation from 1948).

Like her contemporary Dorothy O’Hara, she designed her dresses to be step-in, a major consideration for me yesterday after I did my hair. She later deviated from this pattern–I also have a late 1950s silk day dress of hers with a side zip. This silk taffeta cocktail dress pictured above is very similar to one from her 1950 Fall/Winter collection.

The collar is possibly supposed to stand up, and there’s another sort of wing on the skirt that stands out in her photo but is kind of hidden in mine, because the “flying panels” are no longer as crisp as they once were. Also she’s like a foot taller than me (or was she? in 1957 she said, “Everyone thinks I am much taller than I am. This is achieved by posture and unbroken line”). Still, it’s a gorgeous dress. Marusia (her first name) was born in Poland but lived in California, and although the press largely called her a California designer, she considered herself less influenced by her adopted state and more a designer for the world. Two more fun facts: her second husband was a prince, and she usually modeled her own clothing. In 1956, she began a collaboration with designer Travis Banton, for both Rosalind Russel’s Broadway costumes for Auntie Mame, and their own collection.

But this isn’t the dress I decided to wear.

My friends getting married are much more chill than this. The bride even considered wearing a chic wedding jumpsuit at some point. Their aesthetic is much more modern, so I thought this a bit too stiff for the occasion. Perhaps… pants? 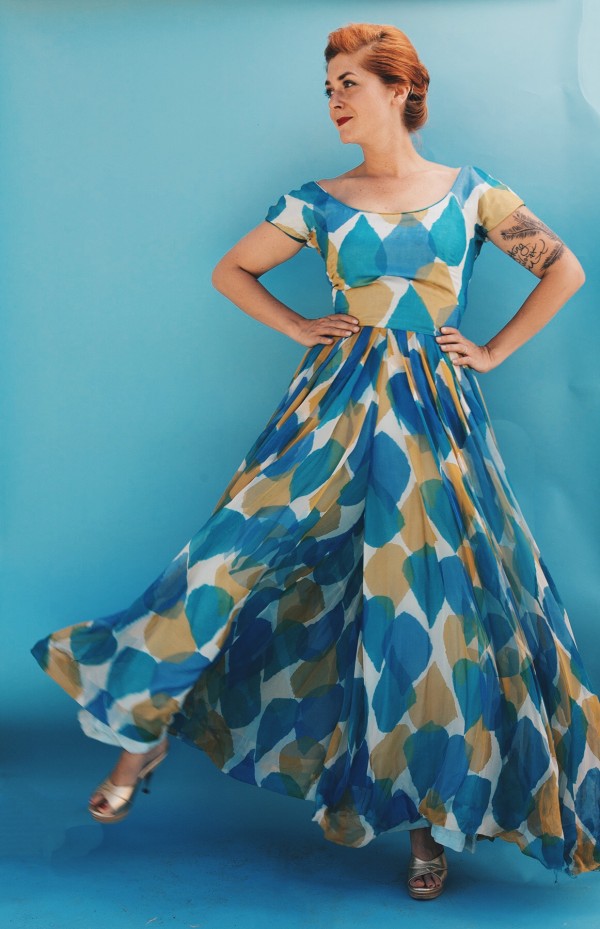 This is me attempting to illustrate that this lovely garment is, in fact, a pantsuit. Hostess pants, to be exact. These early 1960s hostess pants are from the brilliant mind of designer Addie Masters, who first began designing them in the early 1940s (the earliest reference I could find is in 1942). In the 1950s, she largely turned to dresses, but returned to the wide-leg silhouette in 1960, designing them this time in chiffon instead of rayon. These make me feel fabulous. They are appropriate to the couple’s aesthetic. But they’re a bit long on me, and I tend to step on the hem even in heels, so they weren’t the best choice for movement. Next? 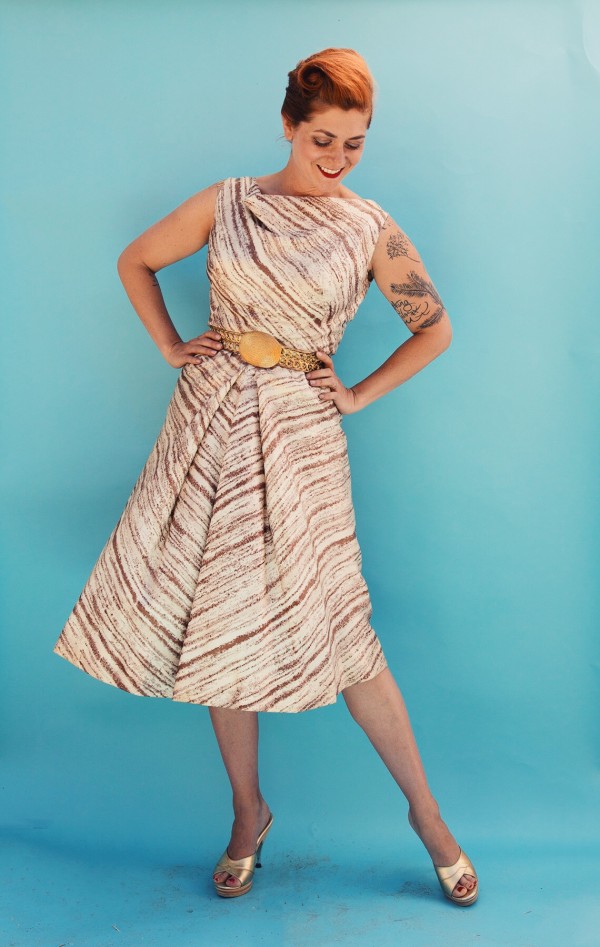 This one was just right. An early 1960s printed silk flare dress, likely by Geoffrey Beene, who was Teal Traina’s designer from 1958-1963. Teal Traina was the nephew of Anthony Traina, Norman Norell’s business partner from 1941 until Anthony Traina’s death in 1960. Belt was my grandmother’s, made in Greece. Polly heels by Remix. 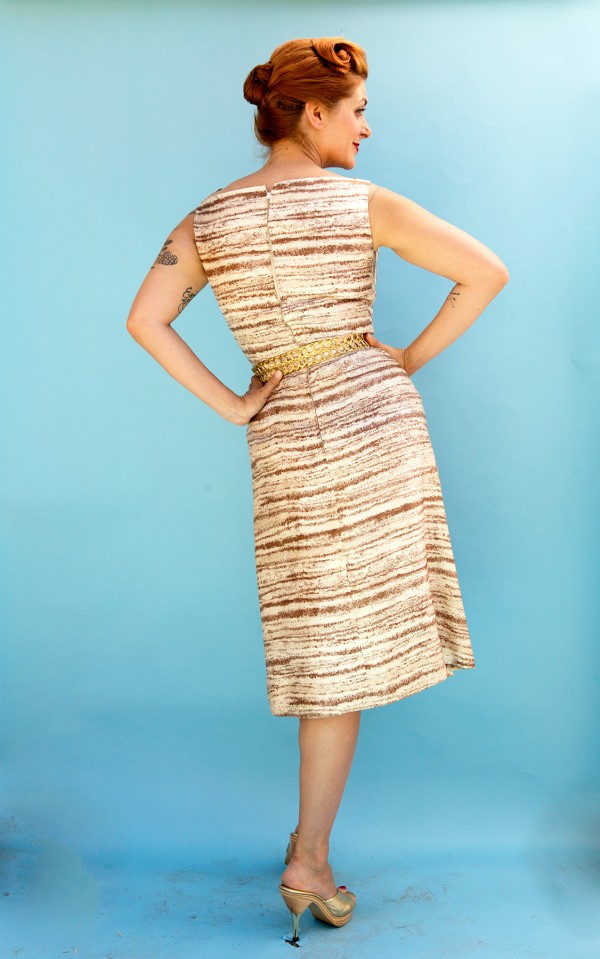 Building a vintage closet, part 5: Putting it all together