In the late 1930s and early 40s, a popular silhouette for beach fashions was a slim torso flaring to a short skirt, as seen in this layout from Vogue dated May 15, 1940, illustrated by William Bolin. 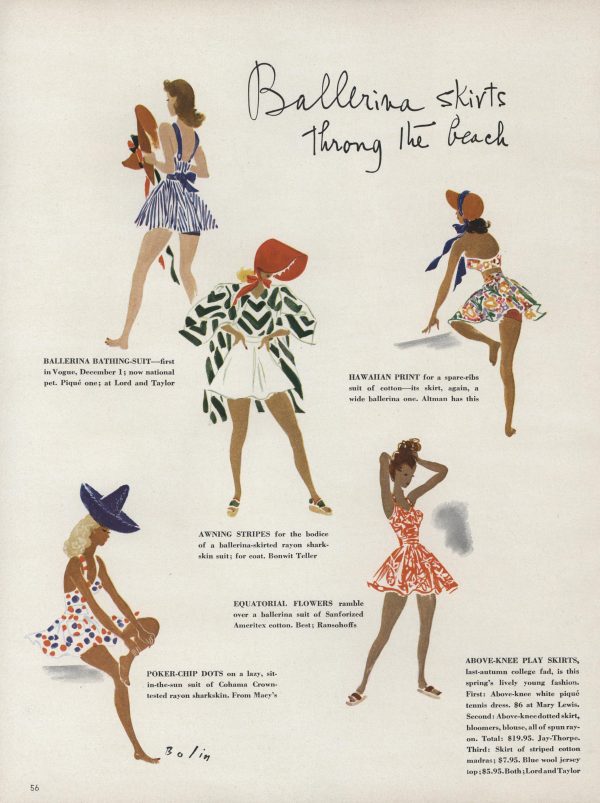 This suit from Lord & Taylor was made right around that time. Tom Brigance, one of the foremost sportswear designers of the 20th century, was in-house designer for Lord & Taylor from 1939-1949 (except for his service during WWII), so it’s likely that he designed this piece. Although his name isn’t on the label, his work of the time is very similar. 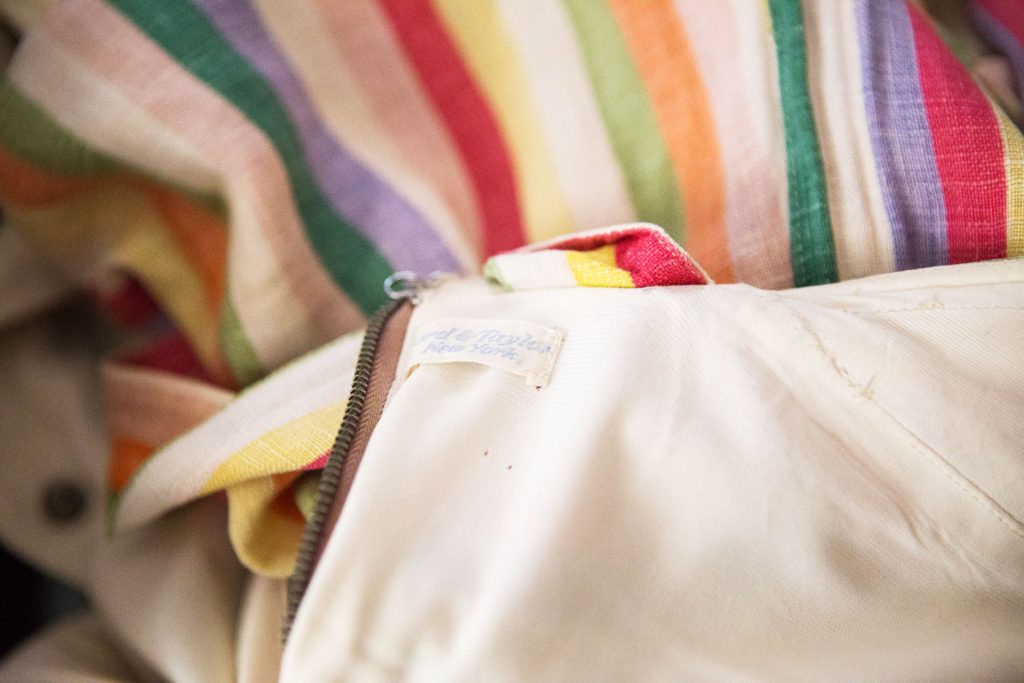 At the same time I found this piece on ebay, I found another ballerina skirt beach piece, a white coverup with a Matletex shirred waistline. 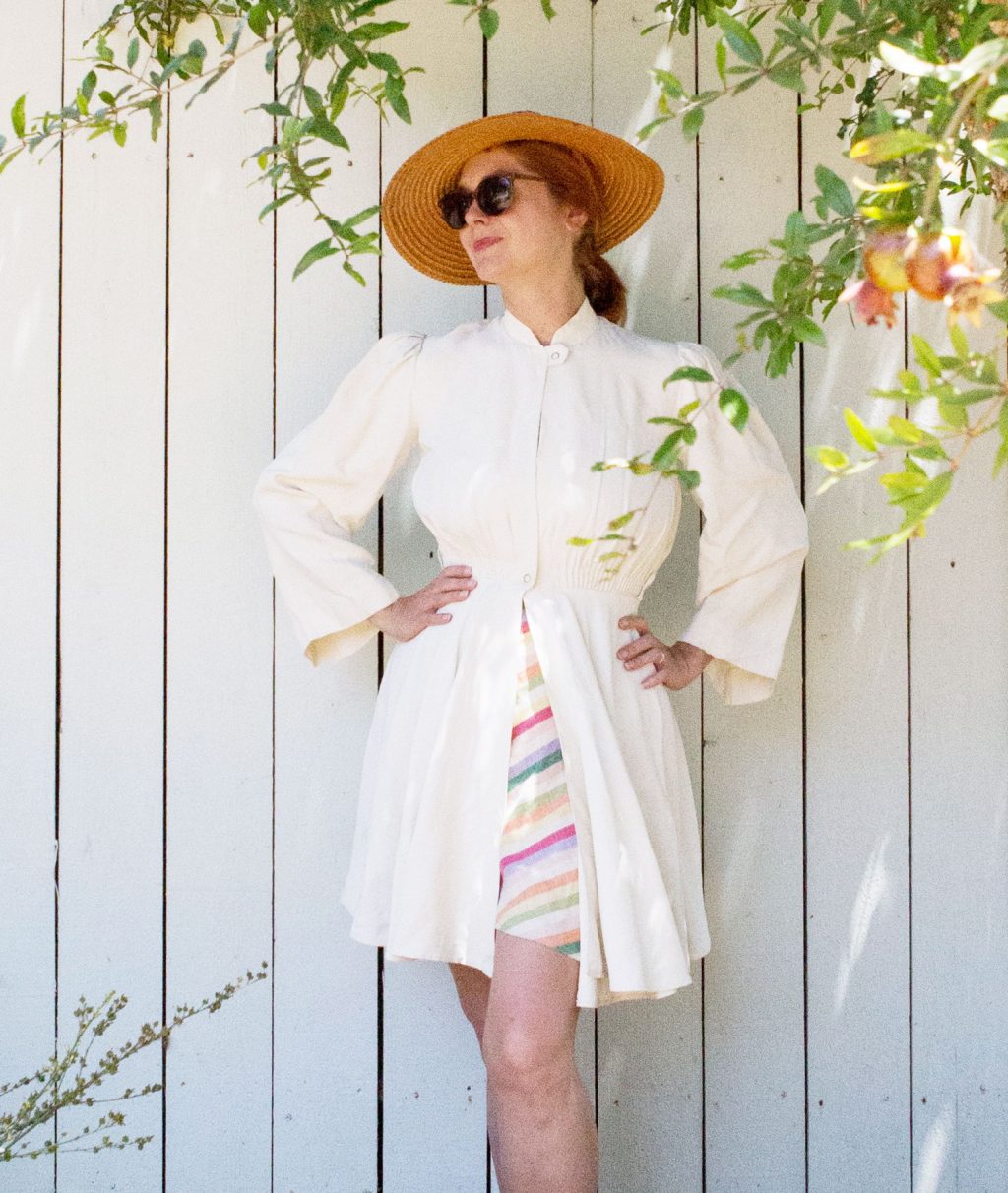 What is Matletex? At first I thought it was the textile itself, the white pique fabric making up the jacket. But then I dug a little deeper and realized that the “Matletex process” was one that Margit Fellegi invented in 1936 as a means of elasticizing otherwise non-stretchable fabrics like cotton for use in swimwear or sportswear.

“It was in 1936, the year that Margit Fellegi joined [Fred] Cole as designer, that the possibilities of Matletex were first visioned. After experimenting with a kind of air tucking with elastic thread, first conceived as a means of getting snug-fitting waistbands… it quickly became apparent that the new process had far more reaching importance.

Here was cotton fabric, given two-way stretch! Here was novelty, here a puckered, elasticized treatment that promised new fit, new functional benefits, new fashion! Miss Fellegi created the Matletex maillot which had the fitting qualities of a knit but the glamour, again, of ‘something different from California.'”

Matletex was essentially cotton woven with elastic thread to conform to the body, like tube socks or a tube top or basically any tube-based garment you might see today. Fred Cole, founder of Cole of California, initially called his concern Hollywood Swimsuits, and later began working at West Coast Knitting Mills, eventually merging with another knitting company, and becoming Cole of California by 1941.

Ad from the Palm Beach Post, 1938. As far as I can tell, Cole never filed a trademark or patent for matletex, and though they advertised it in conjunction with their brand name, other makers continued to use and name it (and obviously, the concept of elasticized shirred fabric continued to be popular in beachwear of all manufacturers for decades to come).

Fellegi also designed beach clothes like skirts, dresses and coverups in the years that followed. Mine is likely from 1940 or 41, which I was able to date partly because this incredible video from 1940:

Does the white jacket she’s wearing look familiar? It’s not exactly the same as mine, but the shape is roughly the same. P.S. – you should really watch the entire video, it’s delightful. 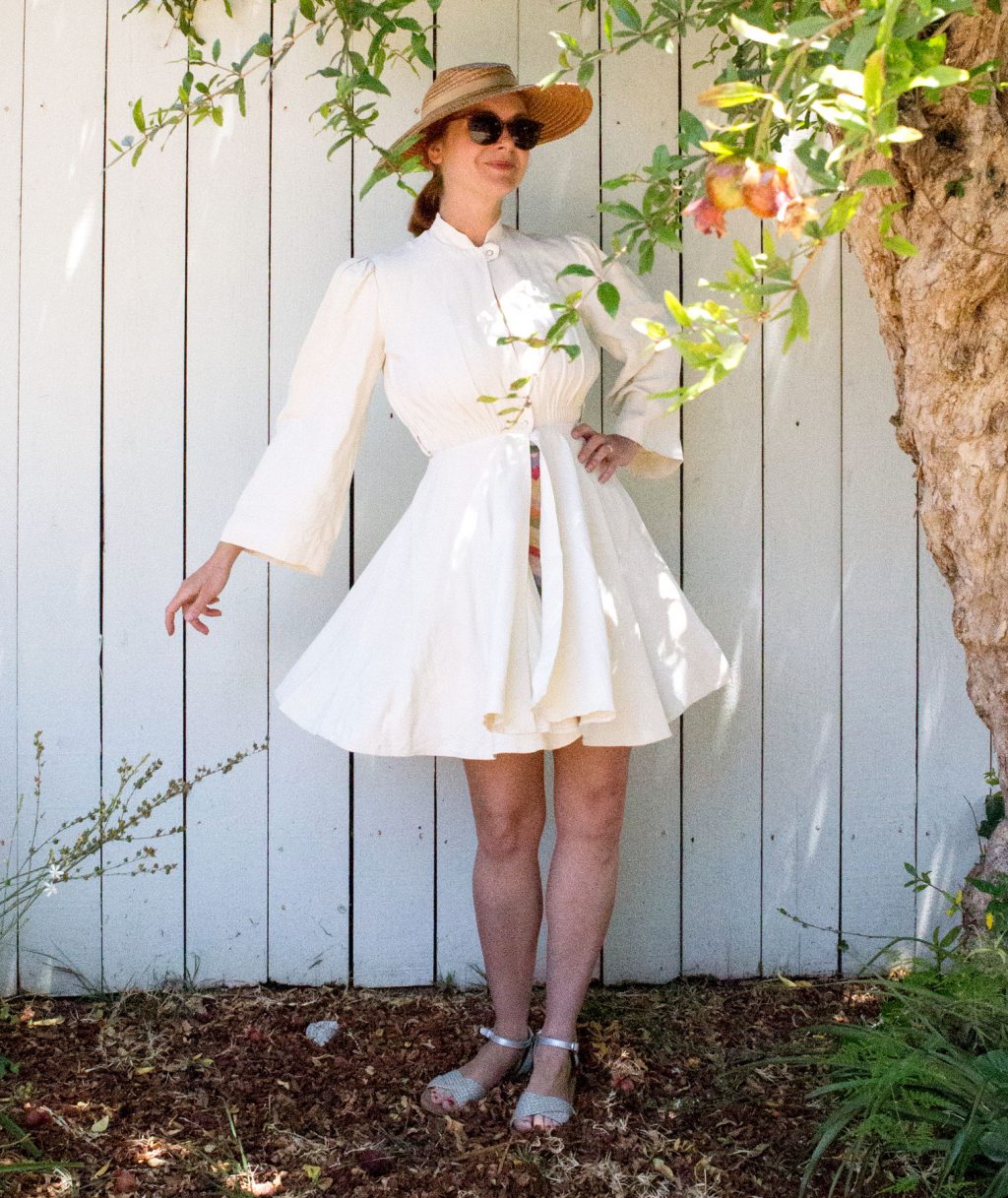 So there you have it: Matletex was not, as it’s name might suggest, a “matte latex” fabric, but rather the process by which unstretchy fabrics were woven with lastex thread to become stretchy and form-fitting. Sorry, Rifftrax! I still love you, and this is still funny:

“The short is also historic because it features all sorts of exciting fabrics that were new then, but absolute mainstays of every woman’s wardrobe today. Fabrics like ‘matte-latex’! Ah, what little girl hasn’t dreamed of growing up someday to be married in a matte-latex gown, sweating as if wrapped in car seat vinyl, eventually passing out from the heat and cooked-in stench. Fashion!”

(you should watch the short with and without the commentary)